Today I wanted to provide some valuable team metrics for the regular season thus far, and by the end of the article use a cumulative format I came up with this summer to summarize how teams have fared along with takeaways for the Steelers upcoming schedule. The linked article dives thoroughly into the value of the data and their predictive measures to winning. The three main stats used are Adjusted Net Yards per Pass Attempt (ANY/A), Turnovers and Explosive Plays (TOX), Adjusted Early Down (AED) Success Rates, and the total calculations called CATS for short.

First, let’s look at ANY/A which is defined as (Passing Yards – Sack Yards + (20* Passing TD) – 45 * Interceptions)) / (Passes Attempted + Times Sacked). Using the differential for offenses and defenses, this is the most predictive individual stat in predicting Super Bowl Winners that I have found in my studies: 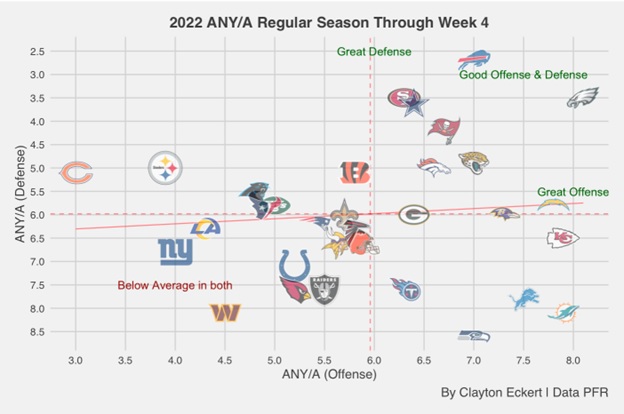 Right away we can see Pittsburgh’s week five opponent, the Buffalo Bills have an elite defensive result of 2.7 that is tops in the league, along with a respectable result on offense that ties for seventh through week four. The Philadelphia Eagles have the best result of 8.1 on offense along with a tie for the second best on defense (3.5), and matchup with the Steelers in week eight. These games are both on the road as well, and will be tough challenges to say the least. The Buccaneers have an above the mean result on both sides of the ball, and are another tough upcoming opponent at home in week six.

Pittsburgh currently sits at the league’s second worst mark on offense (3.9), and it will be interesting to see what the number looks like moving forward with quarterback Kenny Pickett against quality defenses. Speaking of defense, the Steelers have an ANY/A of five which ties for seventh in the NFL currently. Hopefully this number trends positively in the coming weeks, obviously a tall task I am concerned about considering the above and all four opponents before the bye being above the mean on offense.

Next, let’s see how teams have fared in the turnover and takeaway departments: 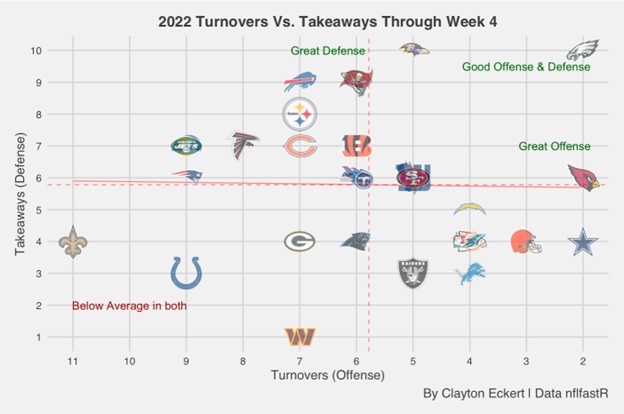 The Eagles sit atop another graph in their impressive start to the 2022 season, ranking first in each data point. Pittsburgh has another above average result on defense, with eight takeaways but below average with seven turnovers, which ties with the Bills. While I’m hopeful Pickett won’t throw three interceptions in a matchup as he did in week four again (knocks on wood), here’s to hoping the defense can continue to provide takeaways with safety Minkah Fitzpatrick as the head of that snake to ease an offense that is adjusting. 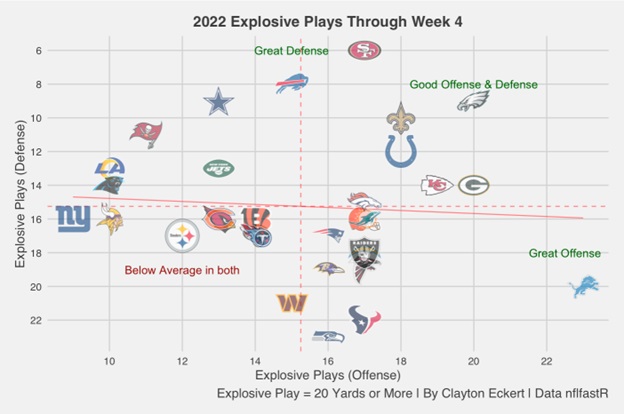 Guess who, the Philadelphia Eagles once again fare best overall, tying for the second rank in explosive plays on offense (20) along with only allowing nine, which ties for third best. The Bills have the second least explosives allowed (eight) along with a near mean result on offense (15). The Bucs also fare well on the defensive side of the ball, with only 11 explosives allowed which ranks sixth, but a matching number on offense that lands just below the Steelers at the bottom of the league. Pittsburgh’s final opponent prior to the bye week are the Dolphins, who are also near the mean on defense (16).

So, if the data holds true the Pittsburgh offense could continue to struggle in the big play department, as they have through four games (12th). This is an area the Steelers defense has struggled in, allowing 17 such plays which is just below the mean and clustered with several other teams. This is the biggest improvement I’m hoping for when it comes to this unit, and it will definitely need to improve these next four games or we’re in for a continued painful stretch. 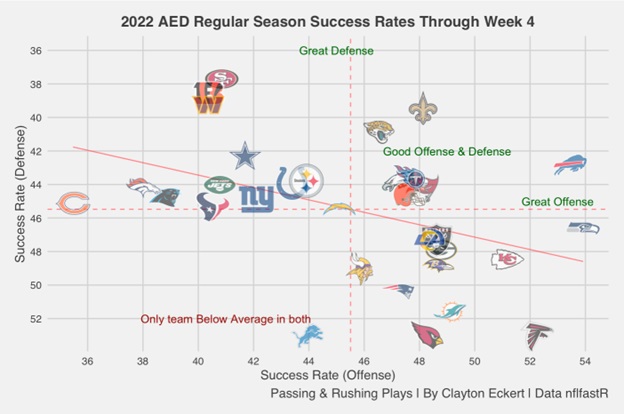 This is where the Bills potent offense has fared the strongest, with an AED of 53.44 that ranks second. Their defensive number of 42.86 is also solid, which is good for the seventh rank through week four. This is another important facet that both the Eagles and Bucs are above average in, two of only seven teams (along with Buffalo) to land above the mean on both sides of the ball. The Steelers return to being above average on defense, with a 43.79 AED rate that ranks ninth in the NFL. The offense is below league average as we sit here today, with a 43.91 result that ranks 21st, and interesting to see all but one team (Lions) that are below average on offense having at or above the mean results on defense.

So, teams have held the Steelers offense to a similar number as their defense, and while we’ll have to sit back and watch the offenses play unfold, the context provided here and throughout the article today really sheds light to why this upcoming schedule is so daunting.

To close, here’s a table of the stats used today showing the differential numbers of teams offenses and defenses along with their ranks, and sorted by CATS differential: 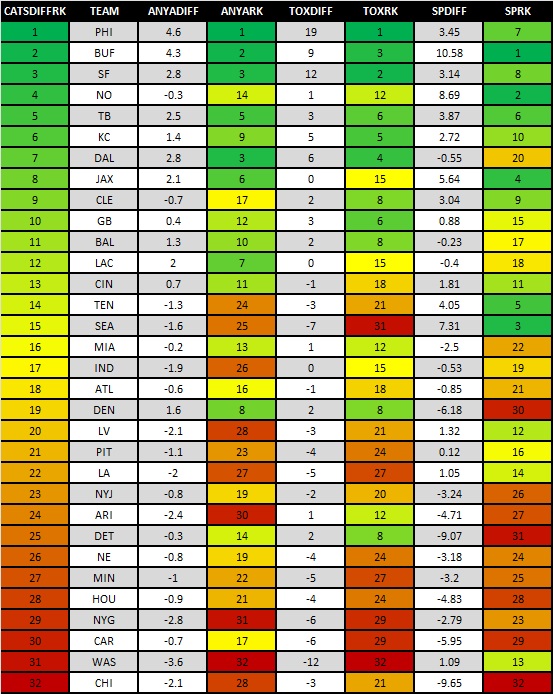 What are your thoughts on the results through four weeks of the season? What do you see the Steelers record being heading into the bye week? Thanks for reading and let me know your thoughts in the comments!