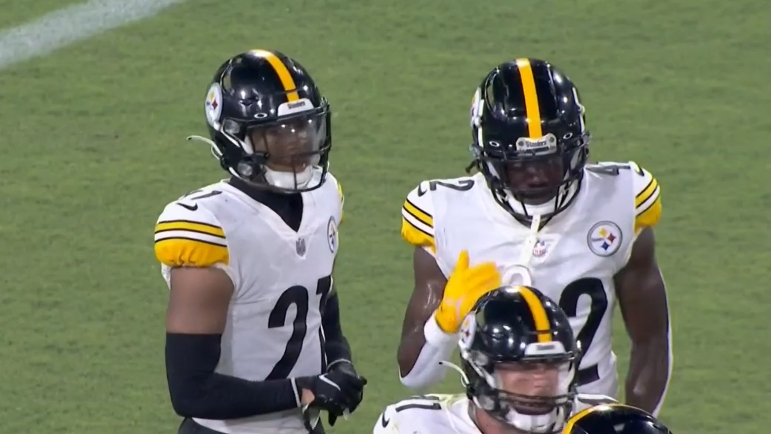 For the majority of his career, Tom Brady has gotten the better of the Pittsburgh Steelers. Going into yesterday’s game, he was 12-3 against the team and has routinely picked apart Pittsburgh’s defense. Well, Brady is 12-4 against Pittsburgh now after the Steelers’ 20-18 win in Week 6. Even with the Steelers missing four starters, including their top three cornerbacks from their secondary, Pittsburgh was able to make Brady look human against them, something that hasn’t been done much in his career. Tre Norwood, who started in place of safety Minkah Fitzpatrick yesterday, said the key was Pittsburgh disguising coverages.

“Our biggest thing is we was just trying to disguise playing, we were playing such a great quarterback like that, we can’t be stagnant. On a defense, try to disguise and make him see something different whenever the ball is snapped. So that was just our main thing, and make him kind of have to hold the ball a little bit longer. So, you know, I felt like we did a pretty good job of that, but it’s always stuff to improve on,” Norwood said via a video posted to Steelers.com.

Disguising coverages not only didn’t give Brady too many easy reads and kept him from getting in any sort of rhythm, but it also had the effect Norwood talked about of making Brady hold the ball just a little bit longer. Pittsburgh’s pass rush, which was more or less dead on arrival in Week 5 against Buffalo, got five hits and two sacks on Brady, including a strip sack by Alex Highsmith and a sack in the red zone by Malik Reed, which was his first as a member of the Steelers. It was a case of the defense working in unison, as good coverage led to a better pass rush as Pittsburgh didn’t let Brady get comfortable at all.

As much as Mike Tomlin and Teryl Austin and the rest of the defensive coaching staff deserve credit for devising the scheme that left Brady flustered, the players deserve just as much credit for executing it. On paper, a cornerback group starting Josh Jackson and James Pierre with Arthur Maulet in the slot shouldn’t remotely stand a chance against Tom Brady and receivers Mike Evans and Chris Godwin.

But that’s why the game isn’t played on paper. The secondary executed just about as well as could be expected, and the defense as a whole came through and only let the Tampa Bay offense put one touchdown on the board. While the Buccaneers had four red zone tries, they resulted in three field goals and one touchdown. It was an impressive effort, and one for Pittsburgh to build on. Norwood talked about how the team can build off it.

“Just starting today, putting our head back down and going to work. Going up for meetings, making a correction from the game, and applying it to this week. Getting ready for Miami. Never satisfied, never listening to the outside noise. Just making sure that we’re keeping our main focus here in the building,” Norwood said.

While yesterday’s win was impressive, Pittsburgh is still 2-4 with a tough road the next two weeks against the Miami Dolphins and Philadelphia Eagles before their Week 9 bye week. There’s been a lot of outside noise this year, but as Norwood said, the Steelers just have to focus on the task at hand, and that’s beating the Dolphins on Sunday Night Football.