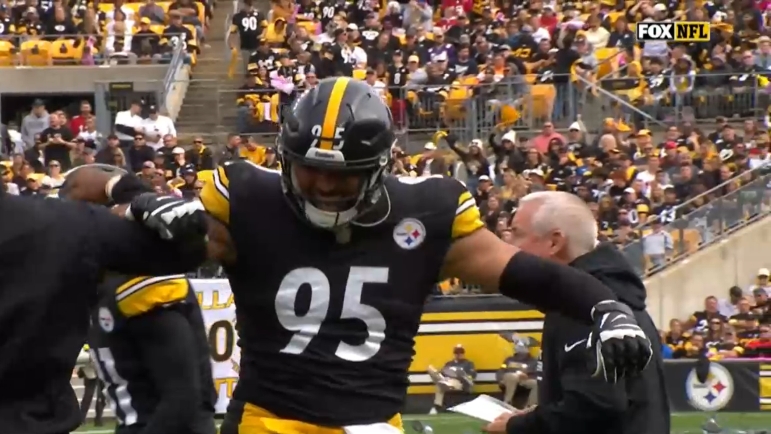 The Pittsburgh Steelers entered Sunday’s home game against the Tampa Bay Buccaneers with a 1-4 effort and not much hope of a win on Sunday. However, a banged-up secondary stepped up and even with Kenny Pickett going down with a concussion, the Steelers’ offense did enough to beat Tom Brady and the Bucs 20-18.

Tampa Bay started with the football, but they went three-and-out to open the ballgame. Pittsburgh’s drive opened at their own 34, and QB Kenny Pickett completed his first three passes and picked up two first downs. On 3rd and 6 later in the drive, Pickett was incomplete down the sideline to WR George Pickens, but a roughing the passer penalty against LB Devin White gave Pittsburgh 15 yards and a first down.

Later, OG Kevin Dotson was flagged for a false start in the red zone, and the Steelers were forced into a 3rd and 11. Pickett scrambled to set up 4th and 1 and Mike Tomlin kept the offense on the field and RB Jaylen Warren powered through up the middle for a first down. Two plays later, Kenny Pickett hit RB Najee Harris in the flat, and Harris took it in for a Steelers touchdown, Pickett’s first passing touchdown of his career. K Chris Boswell’s extra point put the Steelers up 7-0. It was Pittsburgh’s first opening-drive touchdown since Week 10 of the 2021 season.

The Buccaneers got right to work with a 13-yard run by RB Leonard Fournette and a 20-yard completion by QB Tom Brady to WR Mike Evans. They picked up another first down on a short throw to RB Rachad White. After getting in the red zone, the Bucs were forced to settle for a field goal, and Ryan Succop was good from 30 yards to make the score 7-3 with 2:50 to go.

The Steelers second drive started on their own 13 after a poor kick return. On 3rd and 7, Pickett was sacked for a loss of 12 and the Steelers were forced to punt. Pressley Harvin III punted from the end zone, and his 52-yard punt led to Tampa Bay starting at their own 44. After a second down false start, Brady connected with WR Chris Godwin for 21 yards and a first down. Back-to-back runs were enough for a first down, and 10-yard and 11-yard completions helped the Bucs get inside the 5, and a two-yard Leonard Fournette run put the Buccaneers in prime position at the Pittsburgh 1. DL Larry Ogunjobi then blew up a run attempt for a loss of three, and OLB Malik Reed sacked Brady. Tampa would settle for a 27-yard Ryan Succop field goal to cut the Pittsburgh lead to 7-6 with 11:01 left.

On first down from their own 19, the Steelers gained six yards on a scramble by Pickett and then 14 yards and a first down on a Harris run. Two more first downs on completions to Chase Claypool and Diontae Johnson moved Pittsburgh to the Tampa Bay 36. The drive would stall out though, and Boswell came out for a 55-yard try which was good. Pittsburgh took a 10-6 lead with 4:06 left.

Tampa Bay went three and out on their next drive and Pittsburgh got the ball back at their own 26 with 2:42 to go. The Steelers responded with a three-and-out of their own, but Harvin booted a 53-yard punt and the Buccaneers would start their next drive at their own 25. They continued the trend with another three-and-out that included an Alex Highsmith strip-sack on first down, but Tampa recovered the fumble.

Pittsburgh just ran out most of the clock and punted back to the Buccaneers with 26 seconds left. Tampa Bay would have a chance for points as they started their drive at their own 49 with 23 seconds left. On first down, Brady found Godwin for 15 yards and then spiked the ball to stop the clock with ten seconds left in the half. After an incompletion, Ryan Succop hit from 54 yards to make the score 10-9 at the half.

The start of the second half was electrifying with Steven Sims returning the second-half kickoff 89 yards to the Tampa Bay 12. The Pittsburgh offense couldn’t do anything with it though, and they had to settle for a Boswell field goal. He was good from 25 and the Steelers took a 13-9 lead with 13:58 left in the third quarter.

Tampa Bay quickly moved into Pittsburgh territory, as a few runs and a nine-yard pass to Godwin coupled with a 28-yard completion to Godwin had Tampa at the Pittsburgh 30. An eight-yard run by Fournette later in the drive put Tampa in the red zone. Defensive holding on James Pierre later in the drive gave Tampa Bay a 1st and Goal, but they were again forced to settle for a field goal. Succop hit his fourth field goal of the game, this one from 24 yards, and the Steelers held onto a slim 13-12 lead with 7:24 left in the 3rd quarter.

On the Steelers’ next drive, Pickett went down with an injury on first down, a play that was negated by a holding call on Kevin Dotson. He was replaced by Mitch Trubisky, and despite Trubisky getting a first-down completion to Chase Claypool, the Steelers drive stalled out. Harvin’s punt pinned Tampa at their own 14, which is where their next drive would start.

Tampa Bay wouldn’t pick up a first down and punted away. Sims returned the punt 24 yards, and Pittsburgh took over at their 48. A first down sack set the Steelers back six yards, and they would go three-and-out. Harvin’s 30-yard punt would start Tampa Bay on their own 17.

Tampa went three-and-out after a 3rd and 1 run stop by Chris Wormley and Terrell Edmunds. Sims lost seven yards on the punt return and the Steelers would have their first fourth-quarter drive begin at their own 29.

On 3rd and 13, Trubisky and Pickett connected for 14 yards and a first down. After two runs by Najee Harris set up 3rd and 6, Trubisky went deep and hit Connor Heyward for a 45-yard gain. Two plays later, Trubisky threw a touchdown pass to Claypool, and the Steelers took a 20-12 lead after Boswell’s extra point with 9:55 left.

On 3rd and 4 on Tampa Bay’s next drive, TE Cade Otton picked up the team’s second first down with an impressive grab for 17 yards to move Tampa to the Pittsburgh 45. A 3rd down run stuff by Tyson Alualu on a QB sneak attempt at the Pittsburgh 29 after no-gain on 2nd and 1 made Tampa Bay keep their offense on the field on 4th and 1, but on 4th down Fournette picked up seven yards and a first down. Another fourth-down pick-up later in the drive on a two-yard completion to Rachad White was followed by an 11-yard touchdown pass to Leonard Fournette, who took a swing pass to the end zone. Tampa Bay went for two. On the 2-point attempt, Brady’s pass was batted down by Devin Bush, and the Steelers held onto a slim 20-18 lead with 4:38 left to play.

Najee Harris picked up eight yards on a first-down run with a big broken tackle. On the next play though, Mason Cole messed up the snap and Trubisky fell on it to make it 3rd and 16. The Steelers somehow converted, though, as Trubisky found Claypool for 17 yards and a first down. On 2nd and 7, Trubisky was stopped for a loss of four on a read option. On 3rd and 11, it was Claypool coming through again with a 26-yard reception on an impressive catch along the sideline. A nine-yard run by Trubisky gave Pittsburgh a 2nd and 1 coming out of the two-minute warning, and a QB sneak was enough for the first down to clinch the win. The 20-18 win snapped the Steelers’ four-game losing streak.

The win moves the Steelers to 2-4, while Tampa Bay drops to 3-3. The Steelers will travel to Miami next Sunday to take on the Dolphins on Sunday Night Football.