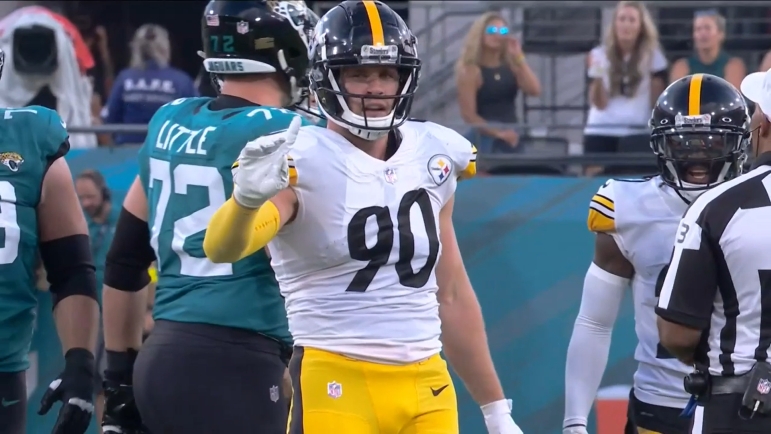 It can sometimes be hard to quantify the impact one player can have, especially when that player isn’t a quarterback. But the Pittsburgh Steelers are 0-3 this season with T.J. Watt on the Reserve/Injured List, and barely scraped together an overtime win in the one game in which he played most of the way.

We don’t know exactly when the Steelers will be getting the 2021 Defensive Player of the Year back on the field, but he is eligible to begin practicing next week. In other words, they won’t have him for Sunday’s game against the Buffalo Bills, and that’s going to be a problem. But what kind of spark can he give the team when he does return?

“T.J. Watt doesn’t get hurt, and I know injuries are a part of the game as much as tackling and blocking, they’re 4-0 right now”, former Steelers defensive lineman Chris Hoke said yesterday during an appearance on the Cook & Joe Show on 93.7 The Fan.

I don’t know if that’s true, but you’d have to think that having him on the field would have certainly made a noticeable difference. After all, he is one of the best pure pass rushers in the league, if not the very best, and the Steelers have been deficient in this area since he’s been out.

Now we can’t go without mentioning the fact that Watt’s teammate, Alex Highsmith, currently leads the NFL with 5.5 sacks, even if three of them came in the first game while Watt was still on the field prior to injuring his pec.

Hoke said that he believes the Steelers have the “pieces in place to be great” on defense—with Watt on the field. Well, they do have Minkah Fitzpatrick at free safety as well, who is playing at an All-Pro level. Myles Jack has been a mostly pleasant surprise at inside linebacker.

Still, the front seven as a whole has been a disappointment so far. Tyson Alualu has already been demoted. Cameron Heyward is not playing quite like himself. Larry Ogunjobi has largely done what is expected of him, but there are issues of cohesiveness that are of greater concern.

As Heyward repeatedly stresses, it’s about 11 people playing together to make plays. Too often, there are only 9 or 10 working to the same end on a given play, and those one or two players not on the same page open the door for the offense (or the defense, depending on which unit is on the field) to take advantage.

The Steelers, at least as of this writing, are 14-point underdogs as they prepare to visit the Bills on Sunday, with rookie quarterback Kenny Pickett making his first NFL start. They need the defense to step up, but without Watt…well, you see the betting line. With Watt for the past three weeks and going into this one, what would the betting lines be then?