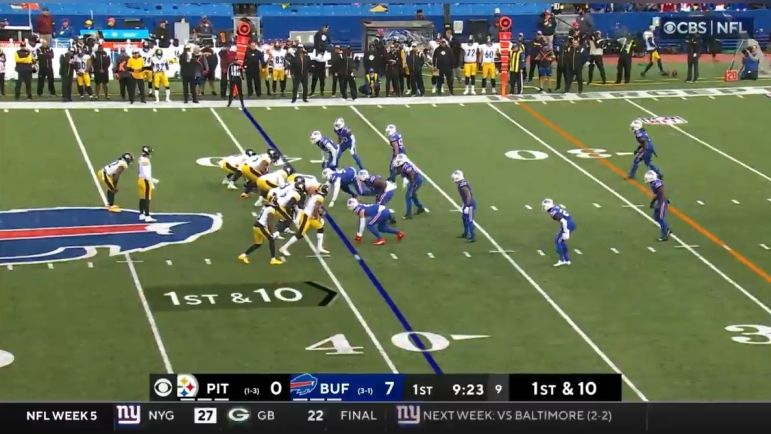 Continuing our look at the Pittsburgh Steelers’ offense, I wanted to take today and visit one of the worst aspects of the Steelers’ offense last season. In 2021, I talked a ton about Pittsburgh’s issues specifically on first down, one of many reasons why their offense felt so stuck in the mud. They had the NFL’s worst first down offenses from a yards-per-play standpoint.

Is it any better this season? That’s what we’ll check in on today.

I’ll spare you the suspense. The good news is…they’re better. Significantly better. Here’s how the 2021 and 2022 first down offense stacks up.

That’s 1.3 yards of improvement and a climb to near middle of the pack in the rankings. A serious, encouraging improvement. While Pittsburgh has been bad on possession downs, the issue doesn’t generally stem on first down. Let’s dig into it a bit more and look at the Steelers’ 2022 first down success by week.

A slow start to the season in Weeks 1 and 2, though still better than the 2021 average, while things have picked up over the last three weeks. The Week 5 number could be skewed a bit given all the garbage time (Pittsburgh averaged 5.0 YPP on first down in the first half against the Bills) but still, it’s not a horrible number given the overall lackluster state of the offense. It’s not much, no one hangs banners for being better-but-still-below-average for their first down success, but it’s a minor positive note on the season.

On average, the Steelers need 6.6 yards across all third downs, tied for 12th-best/closest in the league, yet their success rate is low (35.8% – 25th worst). Hopefully that number picks up in time, and if it does with Pittsburgh remaining average on first down, this unit will move the ball a bit better.

Hopefully none of that is too wonky. The broad point is the first down offense has improved, and over the course of the season, the offense will feel that benefit. We’ll again check in on the data midway through the season and see where the Steelers stand.