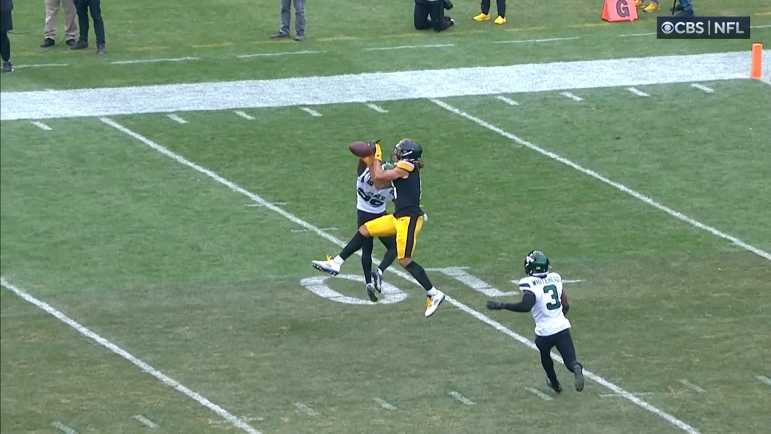 Pittsburgh Steelers wide receiver Chase Claypool earned himself the distinction of being the answer to a trivia question on Sunday, though how notable that question is will only be borne out by time: he was the target of quarterback Kenny Pickett’s first NFL pass. And his first interception—on the same play.

After four straight running plays on his first possession, Pickett had the opportunity to launch one down the field from near midfield, where it met with Claypool and New York Jets defensive back Lamarcus Joyner, ultimately ricocheting into the hands of the quarterback’s Pittsburgh Panthers teammate, Jordan Whitehead, for the takeaway.

While the pass was not ideally placed, turning into a jump-ball situation, Claypool has been criticized for not playing the ball at the highpoint and using his 6’4” frame to his advantage in order to make a play. He defended himself—to some degree, anyway—after practice yesterday in comments made to Brian Batko of the Pittsburgh Post-Gazette.

It was one of only two official targets for Claypool throughout the game, though there was also a third attempt, also deep downfield, negated by penalty. All, including the no-play, were incomplete, the first two coming from Mitch Trubisky under center.

The third-year veteran has caught 11 passes on 20 targets through the first four games of the season for 79 yards, not exactly putting up All-Pro numbers, albeit with little in the way of help. He is only on pace for 85 targets this season, translating to 47 catches for 336 yards. He does not yet have a touchdown.

But his confidence in his own abilities has not waivered, and he seems hopeful that more opportunities will come his way now that Pickett is installed. He talked about how the rookie quarterback told him that he was going to go to him no matter what, saying, “I love hearing that from a quarterback, especially when that’s something I’ve been wanting all season”.

The obvious implication being that he feels he hasn’t been getting it. Of course, nobody in this offense has been properly serviced with the way the unit has performed overall, and their former starting quarterback, Trubisky, shares in a sizeable portion of the blame.

The Steelers drafted Pickett for a reason, and now they begin to find out whether or not their reasoning was sound. One game, indeed even one season, isn’t going to tell the full story, but the move to the rookie at halftime was made not for posterity, but for the present. They believe he can help improve the offense right now. Claypool certainly hopes so. And he fully expects to make that play for his quarterback next time.