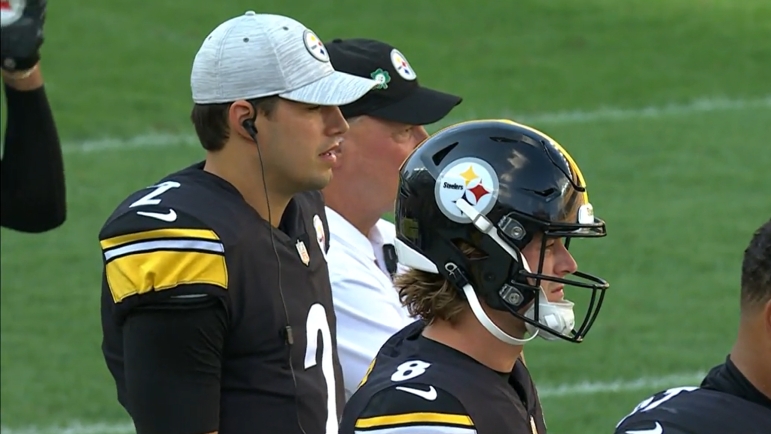 In six days, the NFL trade deadline will arrive and all the endless speculation, rumors and hypothetical trades can all go by the wayside as it will be time for less talk, more action.

Still, we aren’t there quite yet, and with the Pittsburgh Steelers sitting at 2-5 and seemingly going nowhere fast in the 2022 season, leading to them being labeled as a “seller” ahead of the Nov. 1 trade deadline at 4 p.m.

While it makes sense to slap that label on the Steelers currently, the Steelers aren’t all of a sudden going to wave the white flag on the 2022 season and start shipping off pieces to try and recoup draft picks for names like wide receiver Chase Claypool, safety Terrell Edmunds or even backup quarterback Mitch Trubisky.

That said, they could send third-string quarterback Mason Rudolph packing for a Day 3 pick to a quarterback-needy team, should a trade arise in the coming days.

According to CBS Sports’ Cody Benjamin, the trade of Rudolph to a QB-needy team is a deal that the Steelers should make, regardless of the return.

“It’s Kenny Pickett’s time, and Mitchell Trubisky is a solid emergency option behind him. There’s just no longer any need for Rudolph to stick around, whereas a team bound for a 2023 QB competition (Washington? Detroit?) might want the flyer,” Benjamin writes regarding Rudolph and a potential move from the Steelers.

Throughout training camp and the preseason, Rudolph really was in the running for the starting job. He performed arguably better than Trubisky and Pickett in training camp and the preseason, but ultimately was relegated to the QB3 role in the Steel City. Through seven games, Rudolph hasn’t been active once this season and really is just biding his time until free agency hits in the offseason.

While the Steelers certainly are enjoying the security of having an experienced QB like Rudolph as the No. 3 in case of emergency, it’s a luxury that really isn’t needed at this point. If the Steelers were serious contenders, then maybe it would be wise to hold onto an experienced player at the most important position in football, even if he was a depth luxury.

At this point though, the Steelers aren’t going anywhere and should consider flipping Rudolph for a late Day 3 pick. It might not be much, in terms of a return, but it could prove to be a valuable trade in the end, getting another crack at a draft pick late in the process.