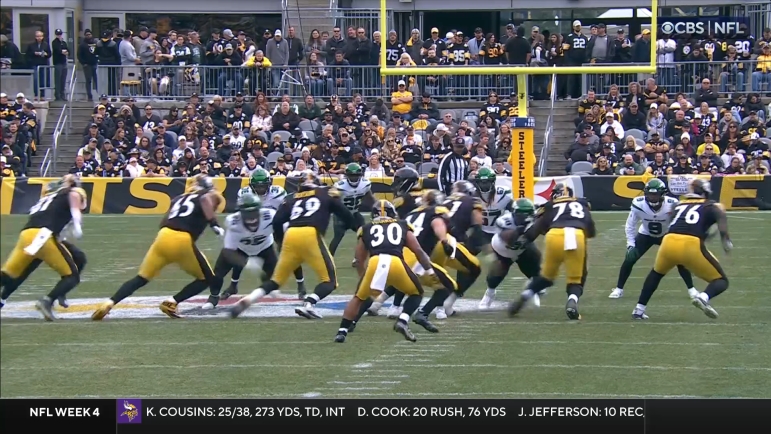 Evolution. Not revolution. That’s how you can describe the Pittsburgh Steelers’ run game. Slowly but surely, the Steelers’ ground attack has trended in the right direction week-by-week. Talking with reporters Thursday, OC Matt Canada can see the progress.

“I think we’re still heading in the right direction,” Canada said via a team transcript. “What did we average? 3.8 yards a carry or something like that. We’re evolving.”

More specifically, Najee Harris’ stats show that growth. Week-by-week, his average has improved as the line has blocked better and Harris has potentially gotten healthier, or at least knocked some of the rust off after missing most of the summer with a foot sprain. Here’s Harris’ weekly YPC numbers.

An increase of 0.4 per carry since Week 2. The opener against the Bengals was a bad week for the run game, generating zero push up front as Harris routinely ran into brick walls. Things have improved since with the line looking more comfortable under new OL Coach Pat Meyer. Kevin Dotson has gotten back to being a more impactful run blocker while James Daniels’ play has grown significantly after a dipterous summer. The team also has a better #2 runner than it has in years with UDFA rookie Jaylen Warren emerging.

Still, the run game has strides to make. They’re not busting off enough explosive runs and have just eleven of 10+ with zero going for more than 20 yards.

Canada concluded with his own favorite lines, even dryly joking about it to reporters.

To Canada’s point, progress is all well and good but sitting at 1-3, it’s time for progress to become more meaningful results. Sitting at say, 2-6 when the run game *finally* breaks through doesn’t do a lot for your season. Buffalo’s run defense is generally unforgiving, allowing just 3.5 YPC with a longest run allowed of only 18 yards. Canada and the Steelers are going to have to change those numbers or else beating the heavily-favored Bills will become an almost impossible task.