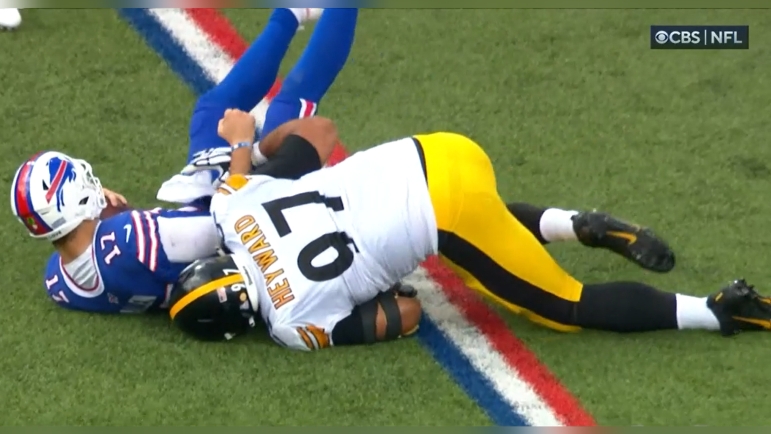 The Pittsburgh Steelers’ defense has struggled the last few weeks. After failing to close against the New York Jets in the fourth quarter and blowing a 10-point lead, they allowed 552 total yards in a 38-3 loss to the Buffalo Bills. Defensive lineman Cameron Heyward said that communication isn’t the problem with the defense, but they’re not executing, especially on key third and fourth downs.

“It’s not a communication thing. I think it comes down to guys executing in big plays. This week it was third down, or them taking shots down the field. Last week, it was in the fourth quarter, us not winning those weighty downs, getting off on a third down, a third and long, or a fourth and short. Those are opportunities for us as a defense to get off the field, or those are opportunities for us to get the ball back to our offense. We haven’t done that. And when you’re not winning those critical downs, you’re setting yourself up for failure,” Heyward said in his postgame press conference after the game via the Steelers YouTube channel.

On the first third down the Steelers faced today, with a chance to get off the field and get the ball in good field position with Buffalo at its own two-yard line, they allowed a 98-yard touchdown pass to Gabe Davis. That would be a microcosm of how the rest of the afternoon went. The defense couldn’t buy a stop until Case Keenum came into the game in the fourth quarter to replace Allen. Sure, they had a few timely turnovers in the end zone, but the Bills’ offense was just chugging along without much of a problem.

Injuries played a factor, as Ahkello Witherspoon and Terrell Edmunds were ruled out before the game and then Cam Sutton and Levi Wallace both went down in-game. It was a JV group in there against the Bills, with the best offense in the NFL. Even with the starters, it would’ve been hard to stop or slow Buffalo down. Down to third-stringers, it was impossible.

The defense has been a bit of a disappointment this year. They’re letting teams extend their drives with third and fourth down conversions (the Bills were 5-9 on third downs today) and averaged 10.2 yards per play. Those numbers aren’t numbers you want to see as an opposing defense. The lack of a pass rush gave Allen all day to do pretty much whatever he wanted with the football, and despite missing Jamison Crowder, Isaiah McKenzie and Dawson Knox with injuries, guys like Khalil Shakir and Isaiah Hodgins were able to make plays.

I know T.J. Watt is out, but this defense has to be better. If they can’t pick it up, this is going to be a really bad team for the rest of the season.