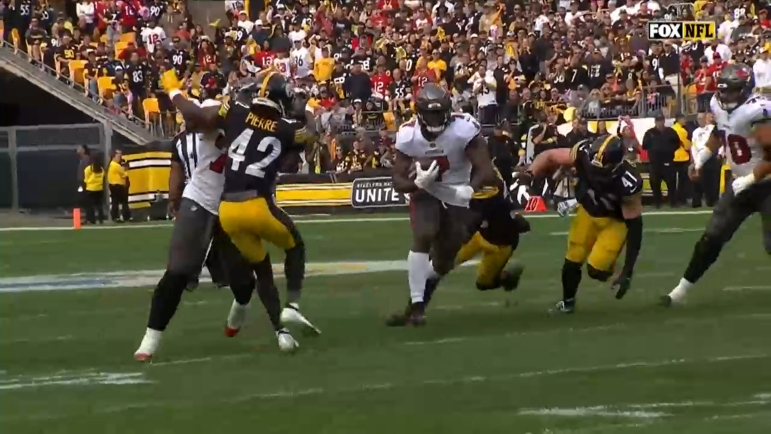 The Pittsburgh Steelers’ offense scored all of three points last week. The defense, conversely, gave up 38. They decided to meet somewhere in the middle this week in terms of righting the ship, with the offense putting up 20 and the defense limiting the damage to 18.

The result was a win, but it took a cohesive effort in all phases of the game, including special teams. While the secondary deserves its plaudits for standing up in spite of great adversity, light also ought to be shined on the front seven, and the defense as a whole, for its performance against the run—and against a back like Leonard Fournette for the Tampa Bay Buccaneers.

The Steelers did a very commendable job against the former first-round draft pick, limiting him to just 63 rushing yards on 21 attempts, or exactly three yards per carry. And while he occasionally got north to south, it wasn’t for long. His longest rush of the day was 13 yards. The Buccaneers as a team rushed for only 75 yards on 26 attempts.

“That takes an 11-man job”, Heyward added. “Corners, safety. Where was one play where Terrell Edmunds did an amazing job of just going downhill. Having those plays from your secondary, they’re invigorating. They set the tone, and we need every one of those plays”.

Edmunds, the only starter in the secondary healthy enough to play, had his best game of the season yesterday, himself returning from a concussion that kept him out of the Buffalo game last week. He and Larry Ogunjobi together dropped Fournette for a loss of three on 2nd and goal from the 1, ultimately limiting the Buccaneers to a field goal. He also had a solo tackle on Fournette on goal-to-go for a loss of two in the middle of the third quarter, another field goal.

But it wasn’t just Edmunds, or even any one position group. The defense as a whole played well, overall, and by as a whole I mean truly as a whole, as a collective, cohesive, 11-part machine working together as one.

It was the most complete performance the defense had shown up until this point this season, even stopping a two-point conversion attempt late that could have tied the game. Sure, they failed to take the ball away and didn’t light up the stat sheet, but they got pressure, and they held the running game in check.

And more importantly, they never trailed. In fact, the defense never played a single second of yesterday’s game without the lead following an opening-drive three-and-out effort. The offense scored a touchdown on its opening drive and the Steelers led the rest of the way. Thanks in no small part to a sizeable improvement from the run defense.