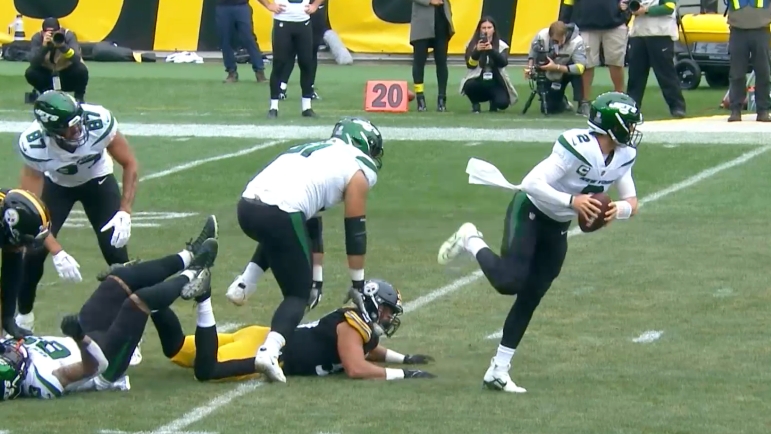 Seven sacks in the first week of the season on the road against the Cincinnati Bengals was a promising sign for the highest-paid defense in the league in the Pittsburgh Steelers.

Since losing All-Pro pass rusher T.J. Watt in that game though, the pass rush has mostly been non-existent, outside of third-year pass rusher Alex Highsmith, as Pittsburgh has recorded just three sacks since that season-opening win. In that same span, the Steelers have dropped all three games, falling to 1-3 on the season, raising some questions about the Steelers’ pass rush after the loss to the Jets.

Granted, in the 24-20 loss to the Jets Sunday, Pittsburgh generated a ton of pressure until the fourth quarter, getting to New York quarterback Zach Wilson a handful of times, but being unable to finish the plays for the sack. That was especially the case with Highsmith, who should have had at least four sacks in the game, but finished with just one.

Asked after the game what’s wrong with the pass rush overall, defensive leader and team captain Cameron Heyward stated that it’s about being more cohesive as a unit in rushing the passer without Watt on the field, something the Steelers have struggled to do the last three weeks.

“I think we’re doing some things right, but it all has to be cohesive, whether it’s understanding if you have contained or letting a guy know you want to run a game,” Heyward said to reporters following the loss Sunday, according to video via the Steelers official YouTube page. “Those are things we have to pick up up front. I’m fine saying that, like, my group has to be better. I put a lot of pressure and a lot of pride in what we do up front. But that comes with communication.

“…It’s a multitude of things. It’s about working together up front, and we have to continue to pick that up.”

Well, that’s about as spot on as it gets from Heyward regarding the lack of success from the Steelers’ pass rush through four weeks, not including the season-opening performance.

Right now, it feels like Heyward is doing a lot of work drawing double teams and getting a lot of the attention shifted his way in pass protection. Highsmith is eating off the edge, winning his one-on-one matchups, and Malik Reed has flashed at times off the edge, drawing some holding penalties. It hasn’t been consistent though and the Steelers haven’t been able to generate pressure with a four-man rush, especially late in games, resulting in offenses sustaining drives, making big throws late, and winning football games.

Heyward can talk about it being communication issues and still trying to work out kinks playing with new players, but at the end of the day it’s a results business, and the Steelers aren’t getting enough results in the pass rush. That has to change, and fast, for the Steelers to remain afloat until Watt returns.