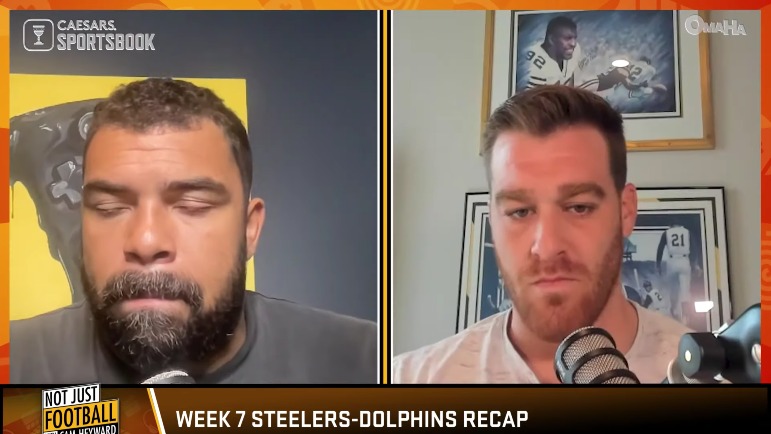 The Pittsburgh Steelers fell 16-10 on Sunday Night on the road against the Miami Dolphins to fall to 2-5 on the season with an impending matchup against the undefeated Philadelphia Eagles. The Steelers lost the turnover battle 3-0 against Miami, with their defense dropping four would-be interceptions throughout the game. On his Not Just Football Podcast, Defensive lineman Cameron Heyward praised the defense and the coverage units, but said that they need to catch the interceptions.

“I don’t have any lack of faith in my DBs. I thought they played a heck of a game. You’re able to keep the top on a guy like Tyreek Hill, look at the way the linebackers played, I thought the linebackers did a really good job in coverage, Devin Bush had a really big breakup. Terrell Edmunds and Minkah [Fitzpatrick] played top-down, really good football. But we gotta catch those interceptions.”

After a shaky first quarter where Miami basically moved the ball at will and put up 13 points. Then, after making some adjustments, the defense buckled down and would only allow a Jason Sanders field goal late in the first half and held Miami to just 16 points in the game. In most games, that should be good enough to win, but late turnovers by Pittsburgh and a general lack of offense doomed them. It’s fair to say Pittsburgh has the worst offense in the NFL, so it would’ve truly taken a Herculean effort by the defense to get Pittsburgh the win on Sunday.

While the defense did well, the best way to cover up a bad offense is to force turnovers and give the offense a short field. Pittsburgh couldn’t capitalize on their opportunities to do so on Sunday, and unfortunately, that’s something that’s going to hurt them. As well as the defense played, they need to take advantage of at least one or two of those turnover opportunities. It helps the offense out by potentially giving them a shorter field and putting the opposing defense in a quick-change situation, and can also help change momentum. In a game like Sunday’s, a turnover or two really could’ve changed the game and tilted things ever so slightly in Pittsburgh’s favor.

Obviously, it didn’t happen, and now Pittsburgh is in the unenviable position of being 2-5, going up against the best team (at least record-wise) in the NFL coming off a bye before they head into their bye. While their schedule does get easier after their Week 9 bye, it’s going to be near-impossible to make the playoffs if they enter that stretch at 2-6. While the defense has played a lot better in recent weeks, the Steelers are getting almost no offensive output, and simply not playing winning football. It could be a really long rest of the season for the black and gold.