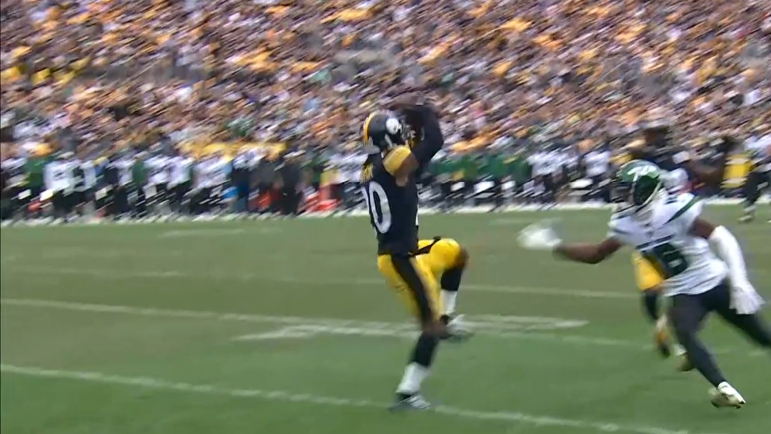 The Pittsburgh Steelers couldn’t close out the New York Jets despite leading 20-10 in the fourth quarter, as they dropped to 1-3 with a 24-20 loss at Acrisure Stadium in Week 4. Cornerback Cameron Sutton said the Steelers need to start playing well for a full 60 minutes.

“We competed at a high-level today but just didn’t get it done. So, just keep finding ways to keep coming together. This is not an individual deal, this is not a one-guy type of thing or just one play defines a game. So just finding 60 minutes, nothing less than 60. So, obviously, that’s a start,” Sutton said after the game today via Steelers.com.

The Steelers haven’t put together a complete performance yet. In week 1, the offense was lost as the defense battled and forced five turnovers in the Steelers’ lone win. In week 2, the offense was again poor and the defense collapsed late, and against the Browns in Week 3, Pittsburgh only managed three points in the second half after scoring 14 in the first half. Today, the offense only mustered six first-half points, although a change to Kenny Pickett resulted in two touchdowns, the defense allowed the Jets to put together two scoring drives late and give up a ten-point lead.

We don’t know what the Steelers will look like if they are able to put a complete game together, but it has to be better than what we’re seeing on the field right now. I think the change to Pickett at quarterback will help, but with a daunting schedule the next few weeks (at Buffalo, vs. Tampa Bay, at Miami) I’m not sure if Pittsburgh will be able to get into the win column.

Sutton is optimistic that the team will be fine, though.

“We got 13 games left, man. It’s a lot of ball left,” Sutton said. “You never look over a game, you never look over the outcome of a game, but we got so much ball ahead of us, just come together at the right times. Obviously, the sooner the better.”

I don’t want to be negative, but Pittsburgh’s chances to come together and stay competitive this season might have already passed. The last three weeks were all winnable games against teams with a similar level of talent, and the Steelers couldn’t get a single win out of that stretch. Now, they’re going up against legitimate Super Bowl contenders in the Bills, Buccaneers, Dolphins and Eagles before their Week 9 bye. Sure, Pittsburgh could take a game, maybe even two in that stretch, but you’re still looking at 3-5 and staring down the barrel of four more divisional games, including two against the Ravens.

Maybe Pickett will really give this team a major boost, and with a full game under his belt, they’ll look like a completely different team. But as things stand right now, it looks like it could be a long season for the Steelers. Hopefully, Sutton is right and they start to come together and gel, and maybe they can surprise us with a few upsets in the next few weeks. I’m not counting on it, though.