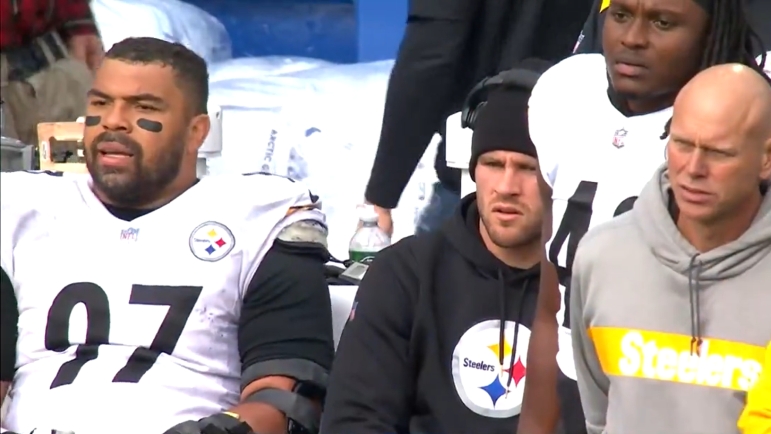 The Pittsburgh Steelers got destroyed by the Buffalo Bills Sunday afternoon, losing 38-3 on the road in a laugher. The defense had no answer for Josh Allen, who threw for 424 yards and four TDs while adding another 42 yards on the ground before getting pulled midway through the second half after he totaled the most passing yards by a Bills QB in a single game in team history before the third quarter was over.

DL Cam Heyward was asked if the injuries Pittsburgh suffered on the defensive side of the football during the game played a part in the defense playing so poorly, to which Heyward responded that injuries aren’t an excuse for Pittsburgh playing that bad in Buffalo this afternoon.

“So what?” Heyward said regarding the injuries Pittsburgh is dealing with on the defensive side of the ball to the media via the team’s Twitter page. “Everybody’s got injuries. We’re in the National Football League. This is the chance for guys to step up. I’ve seen plenty of guys step up before. There’s been countless guys that we didn’t know. A lot of people didn’t know their names before they went into a game. They came out of the game. They were the hero of that game, and they went on to have prosperous careers. It shouldn’t matter who’s in the game.”

However, while this looks bad for the Steelers on the injury front, Buffalo came into today’s game in arguably worse shape. They lost S Micah Hyde for the year with a neck injury and still haven’t gotten CB Tre’Davious White back, who is still recovering from a torn ACL last season. S Jordan Poyer was also ruled out of today’s game with a rib injury, along with LB Tremaine Edmunds with a hamstring, CB Christian Benford with a hand, WR Jamison Crowder with an ankle, TE Dawson Knox with a foot, WR Jake Kumerow with an ankle, and WR Isaiah McKenzie with a concussion.

Injuries can derail an offense or a defense regarding the personnel out on the field and executing the scheme the coaching staff asks of them. These units develop chemistry with one another, resulting in notable drop-offs when a member leaves the game or miscommunication issues when a new member replaces an entrenched starter. Still, Pittsburgh has never been a team that has valued depth behind their starting unit, and that depth has once again been challenged in 2022, with no one providing much of a presence on the edge opposite Alex Highsmith with Watt sidelined, as well as seeing a steep drop-off in play along the defensive line once Ogunjobi left the game.

Heyward is right in saying that injuries are part of the game and that players need to step up when their numbers are called. Buffalo was without both its starting safeties today and the combination of Damar Hamlin and Jaquon Johnson stepped up to help keep Pittsburgh out of the end zone. Pittsburgh hasn’t had notable backup players step up when they needed it most, as Tre Norwood and James Pierre both struggled while filling in for injured starters.

Part of the problem is Pittsburgh’s lack of investment in personnel to provide quality depth, but also the fact that the personnel they do have on the roster aren’t getting the job done when needed to step in. Mike Tomlin mentioned after the game that he isn’t ruling out personnel or coaching changes after Sunday’s blowout loss, and given the results by the defense surrendering over 550 total yards of offense today, changes need to be made if the players on the roster can’t fill in adequately in place of injured starters.