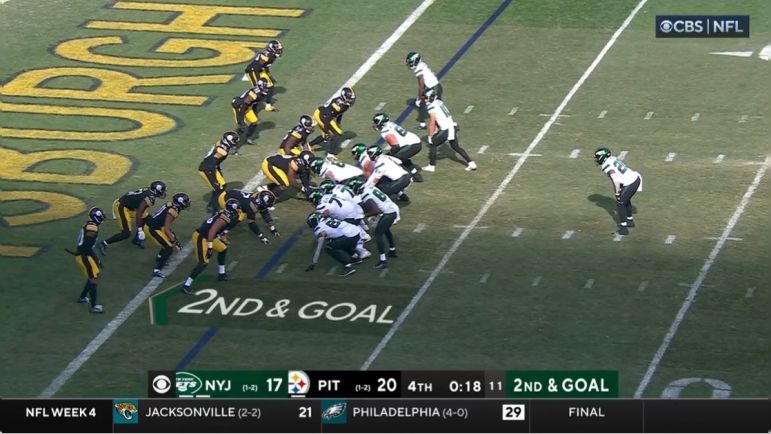 The Pittsburgh Steelers are themed appropriately for the start of October. Their defense sure is playing like a ghost. That isn’t to take away from the issues this team is facing in all three phases. Offensive turnovers, a lack of special teams splash in the punt game, but the Steelers’ defense blew a 20-10 lead to fall to the Jets 24-20. Speaking to reporters after the game, Cam Heyward knows this one hurts in so many ways.

“14 points in the fourth,” he said via the team’s YouTube channel. “Offense did enough. As a defense, we didn’t get off the field enough, especially in the second half. And that’s gonna haunt me.”

Pittsburgh went up 20-10 with 13:36 left in the fourth quarter after Kenny Pickett notched his second rushing TD of the day. On the ensuing drive, the Jets drove 11 plays for 81 yards, winning on possession downs, including a 4th and 7 pickup for 22, that ended in QB Zach Wilson hitting WR Garrett Wilson on third and goal for a five-yard score.

After a Pickett interception, the Jets then drove ten plays for 65 yards and the game-winning score, rookie running back Breece Hall reaching over the goal line for the touchdown with 16 seconds left. So to sum things up, the Steelers’ defense allowed two long touchdown drives to end the day after allowing just ten points through the first three quarters.

A lack of pressure hurt the team late. Wilson worked from clean pockets and picked Pittsburgh apart over the middle of the field, hitting Wilson, Corey Davis, and TE Tyler Conklin for key pick-ups.

On the day, the Jets’ offense recorded nearly 350 total yards and ran for nearly 100 on the ground while winning late on possession downs.

While the offense has received most of the criticism this season, it’s clear the Steelers’ defense has their own faults. They’re very obviously missing T.J. Watt for what he provides as a pass rusher and in the run game, and the team’s backup outside linebackers aren’t getting the job done.

The road ahead doesn’t get any easier. Pittsburgh will face one of the top offenses in football the following weekend in the Buffalo Bills, who led a late comeback against the Baltimore Ravens to win earlier today. After playing the Tampa Bay Buccaneers, the Steelers will then travel to Miami and Philadelphia. At this point the Steelers won’t be favored to win any of those games and starting the year 1-7 is a distinct possibility. 1-7 — get ready for a scary, spooky rest of October.