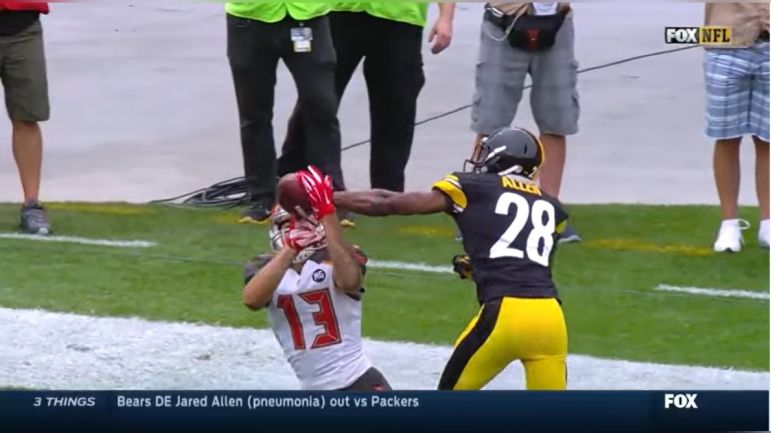 Coming into the league back in 2014 as the Buccaneers’ first round draft choice, wide receiver Mike Evans has come a long way, including an incredible stretch of 1,000-yard seasons that currently sits at eight seasons. It doesn’t hurt that the past few seasons, he’s been hauling in passes from arguably the greatest quarterback to ever play in the ageless Tom Brady, but Evans distinctly remembers that first touchdown pass his rookie season from Mike Glennon, and he’ll be stepping onto that same field come Sunday, even if the naming rights have changed.

“Heinz Field was one of my favorite places that I’ve gotten to play, since I’ve been in the league, scored my first touchdown there, played against Troy Polamalu and James Harrison,” Evans said via the Official Tampa Bay Buccaneers YouTube Channel. “It was a great experience, it was one of our two wins that year and hopefully we get another win come Sunday.”

Indeed the Bucs, despite ending the year with a 2-14 record back in ’14, did come into the Steel City and leave with a 27-24 victory, despite the Steelers possessing the “Killer B” offense, consisting of QB Ben Roethlisberger, running back Le’Veon Bell, and wide receivers Antonio Brown and Martavis Bryant.

In that game, Evans got to experience firsthand one of the most genuine good guys to ever step onto a football field in Polamalu, who recently was inducted into the Pro Football Hall Of Fame in 2021. In fact, Evans indeed did call him the nicest guy he’s ever met on the field.

“I had got hurt that game, I had strained my groin and Mike Glennon had thrown me a go ball and Cortez Allen caught the interception and I couldn’t run.”

Evans then went into detail about how on the interception chase, safety Mike Mitchell was blocking him, hurt or not. And if we remember Mitchell’s playing style, it was as reckless as they come, with a headhunter mentality. It’s also a style that got him fined on numerous occasions.

“I was just trying to stiff-arm him, like get him off me, and then Polamalu was like, ‘Hey, he’s hurt, let him go’ and he was talking to me throughout the game and after the game. Troy’s a real nice guy.”

Troy was as soft spoken as an NFL player comes, but between the white lines, he was a whirlwind, who could go from point A to point B in a flash, and had been known to time snap counts and jump over offensive linemen. It’s a playing style that got multiple All-Pro nominations, the 2010 DPOY Award, two Super Bowl titles and that HOF nomination in his very first year of eligibility.

Evans clearly shows a high level of respect for not only Polamalu, but the former defenders he faced off against, as he mentioned several by name. And he made quite the remark about the newly-coined Acrisure Stadium, a comment that is felt exactly the same by basically all of us.

“I’m always gonna remember it as Heinz Field, no disrespect,” he said laughing.

It’s as good a bet as any that come Sunday, Evans will get into the end zone again, as he’s Brady’s favorite target by far, especially now that tight end Rob Gronkowski is no longer with the team, at least momentarily. With a defense missing it’s best chess piece in T.J. Watt, the pass rush has fizzled out the past few games. And if you want to beat Brady, pressure is a must. Otherwise, he will sit back in the pocket and pick apart your defense like a surgeon knifing through soft tissue.