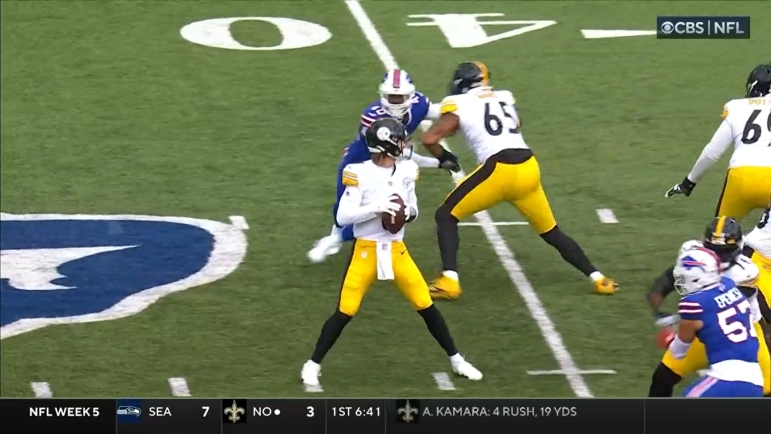 “He can really play,” Leftwich told reporters and followed up by adding, “This kid just from an evaluation standpoint look pretty good on tape to me.”

Pickett made his debut in Week 4, replacing Mitch Trubisky at halftime against the New York Jets. He provided a much-needed jolt to the offense, putting up 14 points in the second half, though Pittsburgh collapsed at the end and lost 24-20. Thrown into the fire for his first start last week, Pickett battled and threw a whopping 52 passes, surpassing that total just once over his college career. Offensive production was poor, just three points, but Pickett played better than the box score indicates, hurt by dropped passes and opportunistic moments receivers couldn’t finish.

Things won’t be much easier against a talented Buccaneers’ secondary. As Bowles pointed out, rookies take their lumps but even the great ones had to start somewhere.

Leftwich himself started 13 games as a rookie, the seventh overall pick of the 2002 draft. He went 5-8 as a starter and threw more interceptions (16) than touchdowns (14), but enjoyed a long NFL career, though much of it came as a backup, including during his time in Pittsburgh.

Being a rookie quarterback no longer means being doomed out of the gate. There’s been plenty of success stories over the years, though Pickett faces a tough set of circumstances. As Dave Bryan wrote earlier today, Bowles’ defenses have given rookies fits, and the Steelers’ offense, players or scheme, has done its quarterbacks no favors. If Pickett pulls off the win, it’ll be the biggest home upset in Steelers’ history. A victory would also give Pittsburgh desperately-needed life to get back into the playoff hunt. That sure wouldn’t be a bad way to endear yourself to the home crowd.