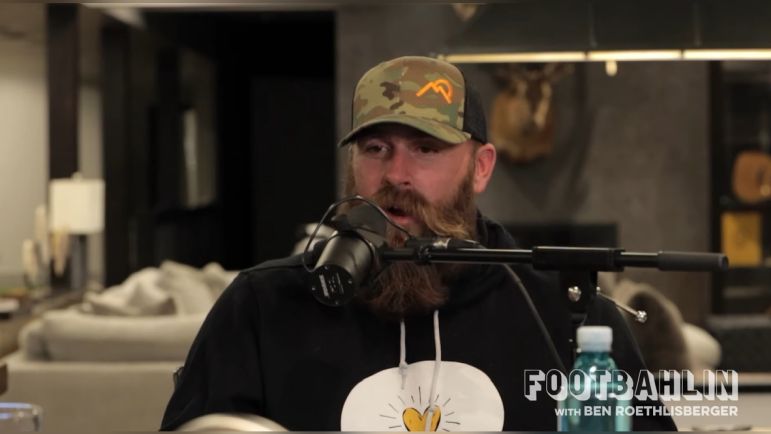 The Pittsburgh Steelers have had their fair share of late-round draft picks and undrafted players that exceeded expectations to have long and meaningful careers with the team. All-Pro linebacker Greg Lloyd and receiver Antonio Brown were drafted in the sixth round, and Defensive Player of the Year James Harrison was undrafted, just to name a few. One name that belongs on this list is former defensive end and fan-favorite Brett Keisel, who was drafted in the seventh round out of BYU and went on to have a 12-year career with the team. In doing so, he had to make several difficult adjustments, which he delved into on Monday’s episode of the Footbahlin with Ben Roethlisberger.

Making an NFL roster as a seventh-round pick is hard, and often takes a lot more work to do than early round picks. Putting together a 12-year career with one team as a seventh-round pick defensive end, let alone adjusting your play style on a fundamental level, is beyond impressive. Keisel had a decorated career, playing alongside many all-time greats including Hall of Fame safety Troy Polamalu and the aforementioned DPoY James Harrison. The former Steeler also won two Super Bowls with quarterback Ben Roethlisberger, and was named to a Pro Bowl in 2010.

Keisel was drafted in 2002, and played under former longtime defensive coordinator Dick LeBeau’s predecessor Tim Lewis for his first two seasons. In doing so, he had to make the adjustment to play on the interior rather than exclusively on the edge as he did as a 4-3 defensive end at BYU. Steelers’ third-round pick DeMarvin Leal, who was a hybrid player in a Texas A&M 4-3 defense, is currently making a similar adjustment in his rookie year.

The 3-4 base defense is not one that the Steelers often employ anymore, as packages tend to depend on personnel year by year, as seen by the Steelers’ adjustment to a 3-3-5 defense to alleviate the absence of linebacker T.J. Watt with the aforementioned Leal. Most of the NFL plays a nickel defense with five defensive backs for a large portion of their snaps as a counter to modern NFL offenses.

Leal’s adjustment to the professional offense in an era where 3-4 and 4-3 defenses are more loose terms than before in comparison to Keisel’s is perhaps a microcosm of how NFL defensive philosophies have changed over time.