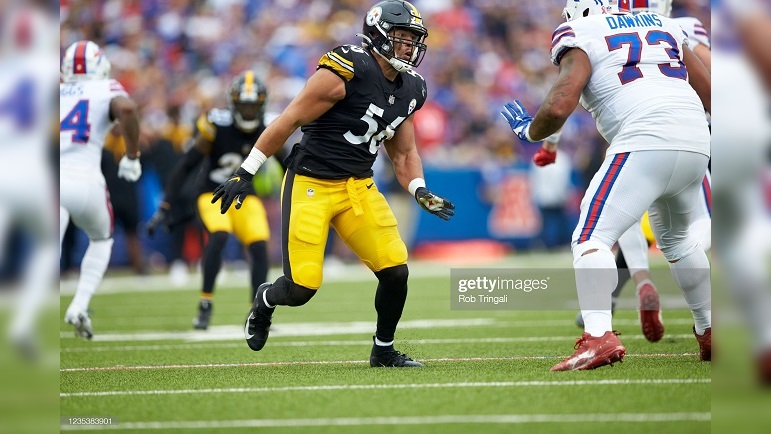 Buffalo Bills HC Sean McDermott recently spoke to the media prior to the Bills’ matchup against the Pittsburgh Steelers in New York this coming Sunday, previewing the game and gave his thoughts about Pittsburgh’s change at QB with rookie Kenny Pickett preparing to log his first career NFL start.

McDermott was also asked about OLB Alex Highsmith who has had to step up in the absence of T.J. Watt who is still on IR rehabbing a pec injury suffered in Week 1 against the Cincinnati Bengals.

“Extremely active player,” McDermott said regarding Highsmith to the media in a press conference which aired live on the Bills’ Twitter page. “He’s had a great career to this point in his career. It’s a young career but plays intense. He’ll move side to side, left side, right side, he does a lot for them. He’s been very productive. I think he leads the league in sacks to this point in the year.”

Highsmith currently sits second in the league in sacks with 5.5 through four games, just recently getting passed by San Francisco 49ers DE Nick Bosa on Monday night. Highsmith also has 24 total stops (15 solo), five TFLs, eight QB hits, and a forced fumble on the year according to Pro Football Reference.

Highsmith has had to step up in the absence of Watt and has done his best to serve as Pittsburgh’s top pass rusher with him out of the lineup. He appeared to be the ideal running mate opposite Watt in Week 1, notching three sacks and a forced fumble as Pittsburgh’s defense swarmed Joe Burrow to the tune of seven sacks in the contest. Since then, opposing teams have been able to focus in more on Highsmith who failed to post a sack the following week against the Patriots, but has gotten back on the board with sacks against the Browns and Jets, respectively.

Entering his third season, Highsmith appears primed to break the double-digit sack mark for the first time in his career, almost tying his career-high of six four games into 2022. McDermott recognizes Highsmith’s leap in production and play and gave him the credit he deserved. Still, Highsmith will once again have to prove he is worthy of such attention as Buffalo will look to key on him this Sunday as the Steelers look to play with the upset in-mind against a heavily favored Bills squad.