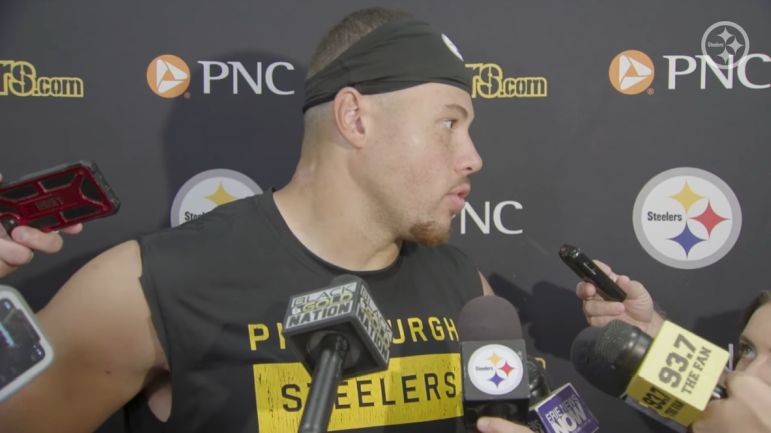 For younger players, getting the chance to meet, or play against someone they grew up rooting for is a surreal moment. In the NBA, it was guys such as the late Kobe Bryant getting to play against Michael Jordan, who many regard as the best basketball player to ever do it. This Sunday, outside linebacker Alex Highsmith will get that chance when he lines up on defense across from a quarterback who many regard as the best to ever do it in Tampa’s Tom Brady.

Obviously growing up in North Carolina and playing at the University of Charlotte, one would be safe to assume Highsmith might’ve been a Panthers fan growing up, which was indeed the case. And make no mistake, he fondly remembers what Brady did to his Panthers in Super Bowl XXXVIII, when they won 32-29 with a few seconds left off an Adam Vinatieri field goal.

“Yeah, I think I cried myself to sleep that night, it was upsetting,” Highsmith said via the Steelers’ official YouTube channel. “That’s probably one of my Brady memories when I was a Panthers fan growing up.”

Highsmith even has some friends and family coming to the game Sunday from back home, so of course, they’re poking some fun at him for some Super Bowl payback, noting how many texts and phone calls he’s been receiving about notching that elusive sack on Brady. That may be a bit more difficult than he expects though, as Highsmith is now a central point of the opposition’s blocking attention. While the reigning DPOY T.J. Watt was normally the hunted while in the lineup, facing constant barrages of double and triple-teams, that extra attention is now devoted to the likes of Highsmith and Cam Heyward.

Now in his third season, Highsmith has firmly come into his own as an NFL pass rusher, as his 5.5 sacks on the year have him tied for second in the league, and is only half a sack less than he posted all of last season. Being relied upon as one of the main sources of pass rush with Watt on the shelf, Highsmith certainly is looking forward to matching up with Brady on Sunday, and also keeping in mind that it not only will be his first time facing him, it may be his last.

“I’m just excited for the challenge, I love playing competitive guys and he’s one of the best to ever do it, so it’s gonna be fun getting after him. I’m confident we got a good plan, it’s just, we really gotta lock in. We know the type of defense we can be, and we know we gotta get back to that.”

Getting back to it would be a great place to begin when considering the amount of talent that exists on that side of the ball. The problem is, the team has registered only three sacks since Watt went down to injury. And knowing how quickly Brady tends to get the ball out, the team could be in for a long day Sunday unless Highsmith can take advantage of a banged up Buccaneers’ offensive line.