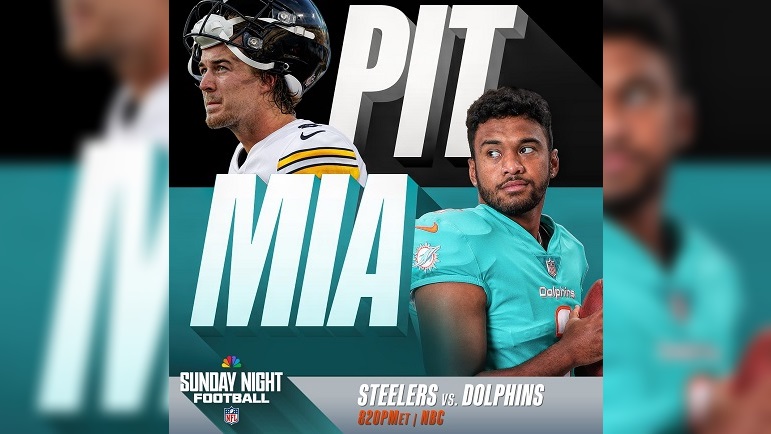 The Pittsburgh Steelers are down in Miami where the weather is going to be a relatively hot 79 degrees at kickoff with 63% humidity. A bit of an oddity playing warm weather football this late into October, but nothing new for the home team.

This is the Steelers’ first Sunday night game of the season and all eyes will be on Kenny Pickett and Tua Tagovailoa as both players return from recent concussions. Tua’s was a hot topic over the last few weeks with back-to-back concussions in his last two games played.

Thank you for joining us on Steelers Depot for this week’s game thread. Be sure to refresh the page throughout the game for curated tweets, video highlights, and more. Also, check out the comment section at the bottom of the page where fans gather to discuss the game in real-time.

Given their extensive injury situation going into the weekend, the Dolphins are in decent shape for this primetime game.

O-line, Alex Highsmith has tall task against LT Terron Armstead (assuming he plays). Maybe Pittsburgh moves him around to LOLB more. Gotten reps there in over/3-3-5 front with Watt out. But NFL sack leader has to respond again today.

Defensively, they play a lot of coverages. Mix things well. Secondary dealing with injury but they disguise and hold coverages well. Lots of post-snap rotation. Kenny Pickett has to be able to process, not get fooled. Needs to see field better than last week.

Need that 💯 tonight and at least one TD 🙌 #Steelers #NFL pic.twitter.com/Tt0ChJVsXE

A sellout crowd for Kenny Pickett’s first primetime football experience. You couldn’t ask for a better set up.

The Steelers won the toss and defer to the second half. Defense starting the game out.

The opening kickoff was returned to the 29 yard line for 28 yards.

Tua Tagovailoa takes the field with his offense for the first time in a few weeks. False start backs up the Dolphins. 1st and 15, Arthur Maulet came crashing down on Tyreek Hill for a loss of 4, but Jaylen Waddle erased the deficit with a 20 yard reception and a first down. 2nd and 19 turns into 1st and 10.

On 1st, Tua complete to Tyreek short in the middle of the field for a gain of 17. Miami is quickly moving down the field.

After converting, Miami burned their first timeout of the half to avoid a delay of game. Some personnel issues for the Dolphins.

On 1st, Tua connected with his tight end, Mike Gesicki for 18 yards. A lot of intermediate massing so far and the Steelers secondary is getting exposed on the first drive.

Now in the red zone, on 1st and 10 Raheem Mostert gained 7 yards. Tua incomplete on 2nd, Terrell Edmunds deflected the would be touchdown to set up 3rd and 3. On 3rd, Tua complete to Raheem Mostert after scrambling for 8 yards and a touchdown. 7-0 Dolphins.

The kickoff went out of the end zone for a touchback. On 1st and 10, Najee Harris off the right side for a gain of 3. On 2nd, a rush to the left to Najee for 4. 3rd and 3, and a deep Kenny Pickett incompletion intended for Diontae Johnson. The 3rd and 3 low percentage play. Pickett’s pass was way off target.

Pressley Harvin’s punt was junor varsity, travelling just 23 yards to the 45 yard line. A holding on the return team backs them up 10 more yards. Miles Boykin forced the penalty. Harvin’s inconsistencies showing up early in primetime.

Raheem Mostert picked up 5 yards off the left end on 1st down, tackled by Myles Jack and Cameron Heyward. 2nd and 5, a deep pass over the middle to Jaylen Waddle for 25 yards. The offense picks up right where it left off with big chunk plays. This game could get ugly in a hurry.

On 1st and 10, Mostert picked up another 12 yards. Almost back in the red zone in just a couple plays.

Chase Edmonds on 1st and 10 picked up just 2. Tua scrambled for 4 yards on 2nd. 3rd and 4, the pass was incomplete with Minkah Fitzpatrick in coverage. Field goal is good. 10-0 Dolphins.

The score is already 10-0 and 10 minutes of game time haven’t even occurred.

#Steelers have to come out with some RPOs here, get some tempo going. Cannot run-run-pass-punt

Gunner Olszewski the return man again while Steven Sims is out with a hamstring issue.

On 1st and 10, Pickett to Pat Freiermuth for a gain of about 6. Chase Claypool’s feet got tangled up with Bethel and an easy interception.

That probably should have been pass interference, but it wasn’t clear cut.

Just outside the red zone, the 1st and 2nd down passes fell incomplete. 3rd and 10, a deep incompletion to Gesicki. Another field goal attempt upcoming. The field goal is good. 13-0 Dolphins.

#Steelers cannot sit in zone all night. Just cannot do it.

Kenny Pickett has his work cut out for him. Down 13 and he has barely ran any plays yet.

It's asking a lot but a touchdown here could at least slow the Miami momentum. Also give the defense a breather. #Steelers

Another touchback, so the Steelers start at the 25 yard line. On 1st down, Najee Harris gained 4 yards. Pickett’s 2nd down pass complete to Diontae Johnson for another 4 yards. 3rd and 2, an 8 yard completion to Pat Freiermuth. A first down is a good start.

On 1st, Diontae Johnson went around the right end for a gain of just 3. Jaylen Warren checked into the game on 2nd down and picked up another 3. 3rd and 4 after the break.

Pickett scrambled on 3rd and was stopped just short of the sticks. Jaylen Warren converted on 4th down.

On 1st and 10, Najee Harris picked up 12 yards on a checkdown pass. Back to Najee on the next play as he picked up 3. On 2nd, Claypool gained 4 yards on the speed out, but the 3rd down pass was incomplete. The Chris Boswell field goal was good from 45 yards. 13-3 Dolphins.

Kenny Pickett with another woeful miss tonight. Concepts aren’t helping him out much though. 3rd and 3 and everything to the sticks? Come on.

We are way too deep into this game for George Pickens to have zero targets.

On 1st and 10, Devin Bush deflected the pass running step for step with Tyreek Hill across the middle. On 2nd, a completion to Sherfield for 7 yards. 3rd and 3, Sherfield on the exact same play picked up 5 and converted.

1st and 10, Mostert up the middle for 3 – Devin Bush there to stop him. The 2nd down pass was incomplete to Tyreek Hill. 3rd and 7, an incomplete pass to Chase Edmonds, he dropped it. A much needed forced punt for the Steelers’ defense.

The next play Pat Freiermuth gained 4 yards on 1st down. On 2nd, Najee Harris rushed up the middle for 4 yards. 3rd and 2, a short pass to Diontae Johnson gained 6 yards to convert.

On 1st and 10, Pickett complete to George Pickens for 6 yards short on the right end of offense. Back to Pickens on 2nd to gain 4 and another first down. The Steelers enter field goal range with a fresh set of downs.

Chase Claypool with an end around for a small loss, penalty called on Najee Harris. 1st and 21, Chase Claypool received the short pass for 12 yards. 2nd and 9, Najee Harris was tackled three yards in the backfield. 3rd and 12 after all of that, Kenny Pickett scrambled up the middle to gain 16 on the ground and convert. Mobility from Pickett showing up big in that situation.

Najee Harris picked up 12 yards on the 1st down rush. Now well within the red zone.

2nd and goal from the 7 yard line, George Pickens caught the touchdown pass in traffic. 13-10 Dolphins.

What an exciting turn of events after that ugly opening to the game. The Steelers get the ball back after the half, so 13-10 wouldn’t be a bad situation to enter halftime. Raheem Mostert muffed the kickoff return, but recovered at the 15. The first down pass went deep in the middle of the field, 32 yards to Trent Sherfield.

1st and 10 from their own 47 with 1:07 remaining in the half. Mostery rushed for 5 yards up the middle. On 2nd and 5, Tua scrambled for another 4 yards. 3rd and 1, a false start backs the Dolphins up to 3rd and 6 and a timeout is called to avoid the runoff. On 3rd and 6, Tua complete to Tyreek Hill for 20 yards deep on the right sideline.

Final timeout called by Miami. 1st and 10 from the 28 yard line, very much in field goal range.

On 1st and 10, Cam Sutton nearly intercepted the pass to end the half, but he couldn’t secure the pass. 2nd and 15 after the delay of game, a two yard gain to Mostert near the sideline. On 3rd and 13, Mostert for two yards. Field goal is good. 16-10 Dolphins.

And that Sutton near interception is why I would rather make Tua try to throw deep. That ball was underthrown. #Steelers