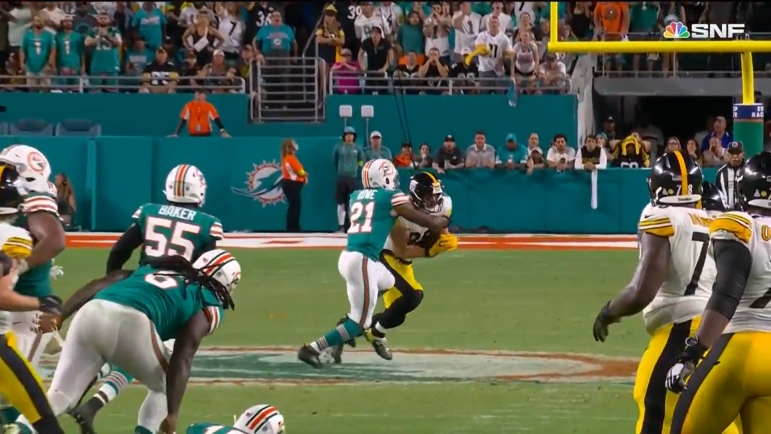 Reasoning: Coming off a concussion that caused him to miss a game, second-year tight end Pat Freiermuth stepped up as a receiving threat for the Steelers last week, catching eight passes on just nine targets for 75 yards and making several key plays, including a critical fourth-down conversion in the final minutes of the game.

Pat Freiermuth finished his rookie season with 60 receptions for just 497 yards. He is certainly on pace for a better average this season. At the moment, he sits at 310 receiving yards after six games played off of 28 receptions. He is on pace for nearly 900 yards and close to 80 receptions if he plays out the string and continues at this same pace.

Already this year, he has recorded at least 75 receiving yards in a game three times. He never even had 60 yards in a single game throughout his entire rookie season, even with five games in which he secured five or more passes.

The Steelers have been finding ways to get him the ball down the field more this season, one of the few minor successes that the offense can reasonably claim in 2022. That needs to continue, and they need to continue to look his way in the critical moments as one of the most sure-handed and reliable players that they have on their offense.

A good receiving tight end can also be a young quarterback’s best friend as a key release valve, and Freiermuth knows how to find and sit in those zones, but the incorporation of deeper routes and targets has been important, as well.