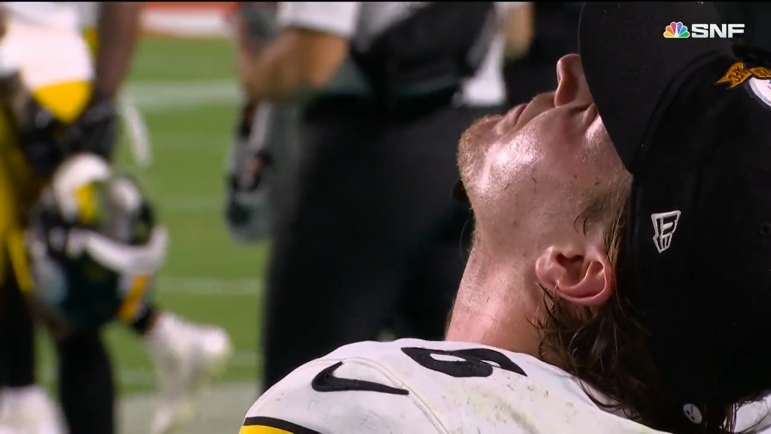 Reasoning: The rookie starting quarterback had numerous bright spots in his third start on Sunday, as he has shown in every game in which he has played at this level, but his day will rightfully be defined by how it ended—two avoidable interceptions on potential game-winning drives in the waning minutes of the fourth quarter.

You can’t possibly talk about a quarterback’s performance in a losing effort in which his offense scored 10 points anywhere else but at the end if the end consisted of him throwing two interceptions that were eminently avoidable.

And so that is where we have to start in talking about rookie first-round draft pick Kenny Pickett’s third career start. While there was a lot of good within the first 50-plus minutes of the game, and even after it, the reality is that those two late throws in particular define the game—unnecessary interceptions.

And specifically, unnecessary interceptions in a one-score game at a time at which ball security was of paramount importance. But we all know what happened. We all saw it. Things happen. The real conversation is what Pickett learns from it.

Because I’m not worried about how he ‘responds’ to it in the sense of wondering if it will negatively affect his mentality or his approach to the game. I absolutely do not. I think he’s at least earned the benefit of the doubt that he has shown that he knows how to approach the game.

It’s now about getting results, and developing while he does. The fact is that he does have seven interceptions now in three and a half games played, but one can only hope that he has learned something from those experiences that he can apply.

Because there is still a lot to like. Nevermind all of the intangible stuff. What about some of the fantastic throws that he made? Obviously the fourth-down conversion to tight end Pat Freiermuth sticks out, but it wasn’t just one play. And it’s not just the balls he delivers. He does make a lot of good decisions. He just needs to avoid the bad ones that kill the team.