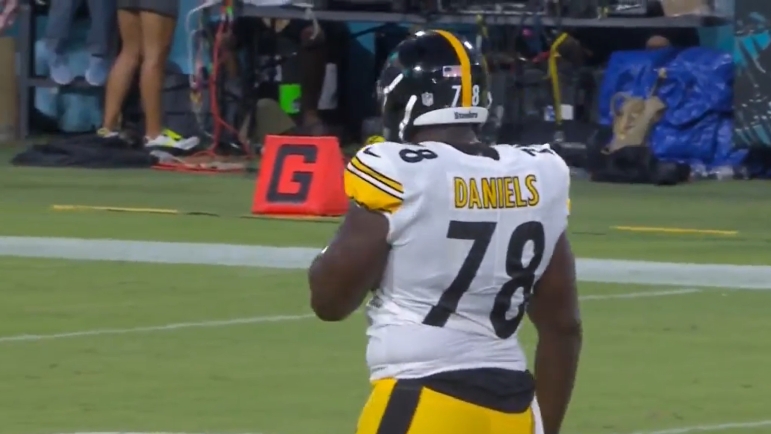 Reasoning: The veteran free agent acquisition came into the regular season with major questions based on his performance leading up to that point, but has proven to be amongst the least of the Steelers’ problems. He and right tackle Chukwuma Okorafor make up the most stable part of the team’s offensive line.

Outside a penalty here and there, there hasn’t been much to complain about thus far during the 2022 season as it pertains to James Daniels, the young veteran offensive lineman whom the Steelers made their highest-paid outside unrestricted free agent acquisition in team history.

Such statements are a byproduct of a rising salary cap, of course, but it is also true that Daniels was a desirable commodity on the open market, and while he is probably not necessarily going to be in the running for a Pro Bowl this year, he is providing the Steelers with a strong base level of performance from the right guard position, which they had been lacking for the past two years (with David DeCastro playing out his final season injured in 2020).

Although admittedly his last game was perhaps his weakest in this regard, Daniels has been particularly strong in pass protection, and has also shown a real knack for what is sometimes called ‘finding work’, which is, finding somebody to block when nobody’s in front of you.

The better news is that we may be seeing signs of development when it comes to his run blocking. While he has never necessarily been a deficient run blocker, he took a more active and aggressive approach, admittedly in limited opportunities, in this past game.

The Steelers desperately need to get the run game going, and if it doesn’t come from their interior offensive line, it’s not going to come. The problem is that center Mason Cole is playing through injury right now. Part of me thinks they should just sit him until he’s healthy and play J.C. Hassenauer, or dress him as an emergency backup instead. Considering Cole hasn’t even practiced yet this week, that may well happen.