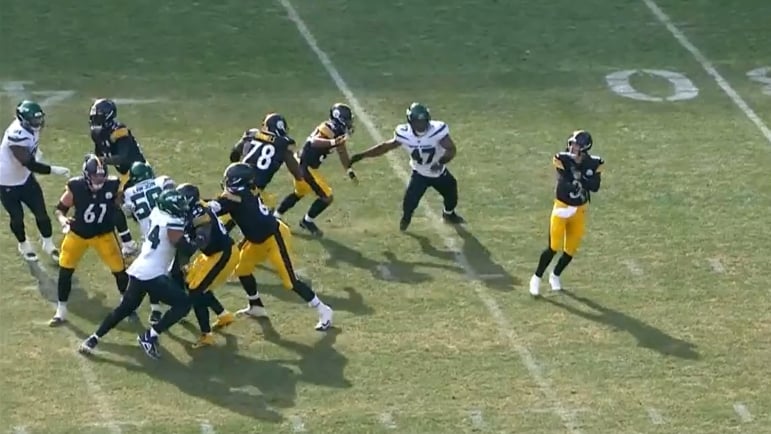 Question: Who will be Kenny Pickett’s favorite target in his starting debut?

Of the 13 passes that Kenny Pickett threw in his NFL debut last week, four of them went to fellow rookie George Pickens, the second-round wide receiver out of Georgia. That initial impression has led many to conclude that he is already emerging at the favored target for Pickett, but that’s not a lot to go on, for many reasons.

Of the remaining nine targets, four also went to tight end Pat Freiermuth, two went to Diontae Johnson, and one apiece were served to Chase Claypool and Zach Gentry. Claypool was his first-ever target, resulting in an interception. Gentry caught his first completed pass (to his own team).

Pickett acknowledged that he hasn’t gotten the chance to get a lot of work in with this skill position group while running on the scout team, and has tried to sneak in reps on the sidelines here and there whenever the opportunity presented itself.

Now he’s had a full weeks’ worth of game preparation and on-field first-team reps with the likes of Johnson, Claypool, and company. How will that translate on to the field in terms of revealing usage differences from his cold turkey debut last week and his first NFL start today?

Johnson has been the team’s leading receiver in nearly every category for going on three years now, the primary reason being that he is the guy who gets open. There’s no reason to think that he won’t be open for Pickett as he was for Ben Roethlisberger and Mitch Trubisky. Will Pickett find him?

And how about Freiermuth? At the moment, he has 18 receptions on the season for 223 yards. He’s on pace for 76 receptions for 948 yards. Will he become a go-to for Pickett the way so many other tight ends like Travis Kelce and Mark Andrews have become in their offenses?