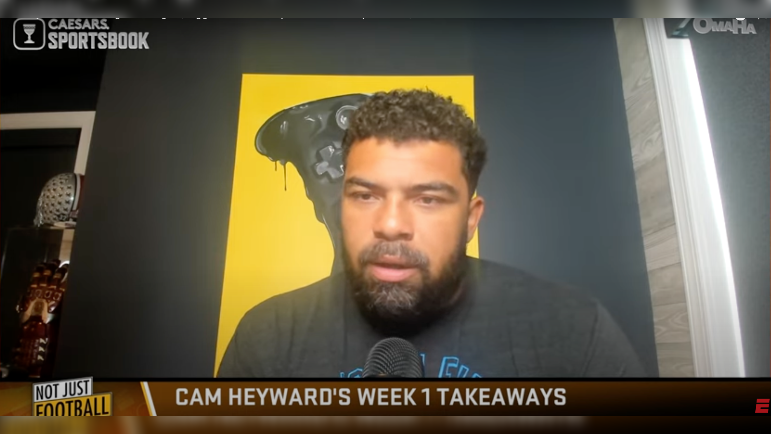 The news regarding Pittsburgh Steelers star outside linebacker T.J. Watt wasn’t as bad as originally feared, but still being without the reigning Defensive Player of the Year for about six weeks due to the pectoral injury he suffered in Week 1 against the Cincinnati Bengals is still a massive blow to the Steelers’ defense.

Playing without key personnel is nothing new for the black and gold, especially defensively, as in recent years Pittsburgh has had to make due without the likes of Ryan Shazier, Stephon Tuitt, Bud Dupree, Joe Haden, Tyson Alualu and more. That’ll be the case for the Steelers now without Watt.

For team captain and defensive leader Cameron Heyward, there is no replacing Watt and his production when it comes to guys like Malik Reed and Jamir Jones being elevated into larger roles off the edge. That said, Heyward just wants the next men up to play assignment sound football and “give us a chance” to compete, he said on the latest episode of his Not Just Football with Cam Heyward podcast.

“One guy is not going to make up for the loss. Luckily, it’s not the whole season, and he’s a heck of a talent so we’re looking forward to getting him back at some time, but it’s a collective that has to pick it up,” Heyward said, according to video via the NFL on ESPN YouTube page. “It’s about everybody doing their job, playing their assignment, understanding they’re not going to be T.J. Watt, but can still be a factor in the game.

“T.J. is a heck of a player; he’s the Defensive Player of the Year for a reason, so don’t expect to play like him. Play like yourself and give us a chance. Play with good technique. That’s what it comes down to.”

That’s part of that next man up mentality that head coach Mike Tomlin has preached during his 16-year tenure with the Steelers. Yes, losing Watt is a significant blow to the Steelers’ defense, in terms of not only production, but how they want to attack defenses. One can’t expect the Steelers to play the same way defensively, at least up front, like Watt is still in there.

That said, the Steelers still have games to play, and having experienced pieces off the edge behind Watt in Malik Reed and Jamir Jones will allow the defense to continue to function at a high level.

Reed has experience being the guy to fill in for a star, having spent time in Denver filling in for the likes of Bradley Chubb and Von Miller early in his career. Getting that step up into the starting lineup due to injury is nothing new for Reed, so the transition Ito a starter for the next six weeks or so shouldn’t be difficult for him.