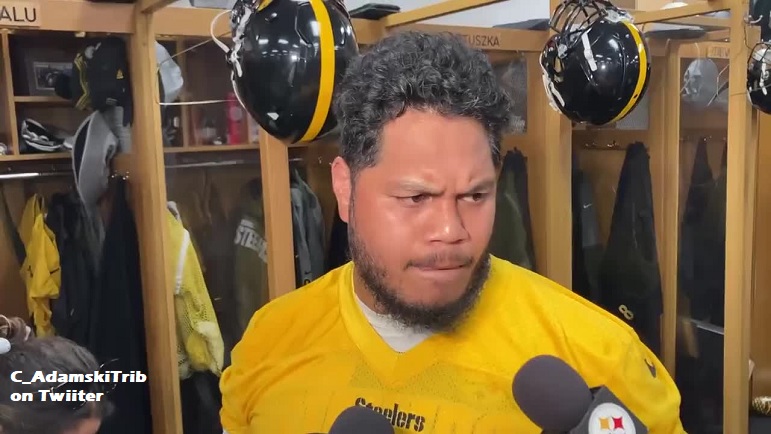 The Pittsburgh Steelers’ run defense, while improved from 2021, is still a bit shaky. This was especially costly in the fourth quarter of their last two losses, as the New England Patriots and Cleveland Browns ran the clock out late en route to their victories. As a result, head coach Mike Tomlin made a change at the nose tackle position, demoting starter Tyson Alualu in favor of second-year Steeler Montravius Adams. When asked, Alualu commented on the decision Wednesday, and appears ready to get back to work.

“It’s more about getting back to playing like I know how I can and doing that consistently,” Alualu said on being demoted to the second team according to the Trib’s Joe Rutter. “It’s back to the drawing board and seeing where I get better from here.”

At 35 years old, Alualu is now the Steelers’ oldest player, and is also among the oldest defensive players in the NFL. As such, he is following the natural career trajectory of declining in athleticism at that age. Not to mention Alualu is coming off a season-ending ankle injury, and mentioned having issues with his knee during training camp.

Adams, a former Green Bay Packers third-round selection, was picked up by the Black and Gold in the middle of the 2021 season to bolster the aforementioned poor run defense. As such, he did enough for the team to bring him back on a two-year extension, and now has an opportunity to start.

“You continue to put in the work and earn the trust of your coaches and teammates to do what you need to do,” Alualu continued. “I have all the confidence in the world that I can do that.”

As the second string nose tackle, Alualu will still be featured in the Steelers’ defensive lineup, as Adams was as the backup. Barring injury, gaining the starting role back may be a tall task for Alualu, who has not looked the part thus far in 2022.

Alualu’s last nearly full season in 2020 was an impressive one, as he earned an elite defensive grade according to Pro Football Focus while playing alongside Cameron Heyward and Stephon Tuitt on the defensive line. For perspective, his PFF grade in 2022 is currently at 40.9. While getting back to his 2020 middle of the season self does not appear likely to happen overnight, any approximation of that will help the team’s run defense immensely. If one thing is for sure, it’s that Alualu is handling the move like the veteran that he is, and will at the very least put the requisite work in to be a contributor in his now-limited snaps.

According to the numbers, it is hard to argue against this move. That is, the team allows five yards per carry when Alualu is on the field, and 2.6 when Adams is on the field. While Alualu played more snaps, this difference is significant, and arguably merits the change in the lineup. Considering the team’s struggles on offense, poor run defense is not something the team can manage.