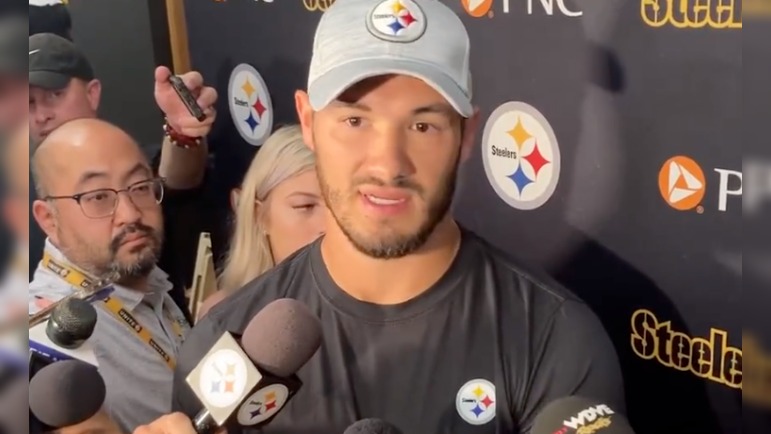 The Pittsburgh Steelers fell to the New England Patriots at home Sunday 17-14 and the offense looked uninspiring for a second week in a row. The downfield passing game was nonexistent throughout the contest which is something that Trubisky was asked if the scheme has opportunities to attack defenses down the field.

“It’s there, and we had our opportunities,” Trubisky said to the media Tuesday prior to practice on video from Chris Adamski’s Twitter page. “I think earlier I can take shots downfield.  I think I could look for #14 more often, George [Pickens]. He’s doing a great job for us, and I got to get these playmakers the football. Whatever route they are running, I just got to get them the ball, so it comes down to me making better decisions, being aggressive, and putting ourselves in that position.”

Mitch Triubisky said “it’s there” in the scheme to have downfield opportunities pic.twitter.com/S2hiGSMDYu

Trubisky came out of Sunday’s game against the Patriots notably irritated when asked if the offense can target the middle of the field more often, stating that more concepts need to be called to get receivers there. He also has said throughout the week in lead up for this game that he needs to be more aggressive and attack the opposing defense, allowing his receivers a chance to make plays down the field to get explosive pass plays to move the offense more effectively than through the dink and dunk passing game.

After going through the tape, it’s clear that there were opportunities to attack the defense down the field and in the middle of the field on Sunday, but Trubisky missed those opportunities either due to a missed throw to his intended target or locking onto a check down options near the LOS instead. Him mentioning George Pickens by name is notable as the rookie receiver only has two receptions on six targets for 26 yards in his first two games despite tearing it up in the preseason as a notable downfield threat. There have been several opportunities for Trubisky to target Pickens the last two weeks, but they have failed to connect on anything significant outside of a 23-yard reception against the Patriots.

Watch George Pickens on the wheel route. It's schemed up well. #Steelers pic.twitter.com/XjwP2e6sh6

There is growing unrest for Trubisky two games into the season, which is understandable given Pittsburgh anemic offense. He has failed to surpass 200 passing yards in either contest and is averaging 5.1 yards per attempt, a full yard worse the Ben Roethlisberger averaged last season. While the blame can’t completely fall on Trubisky, there is no denying that he must play better and make more happen down the field to keep defenses honest. Completing more deep passes will only help the running game, taking defenders out of the box as teams have been able to crowd the LOS for lack of fear of getting beat deep against Pittsburgh for some time now.

The team appears to have faith in Trubisky to turn this ship around and show that he can do better at locating and connecting with his pass catchers down the field to spark a stagnant offense. However, should we see more of the same thing moving forward out of the veteran QB, rest assured more will be calling for a QB change sooner rather than later.