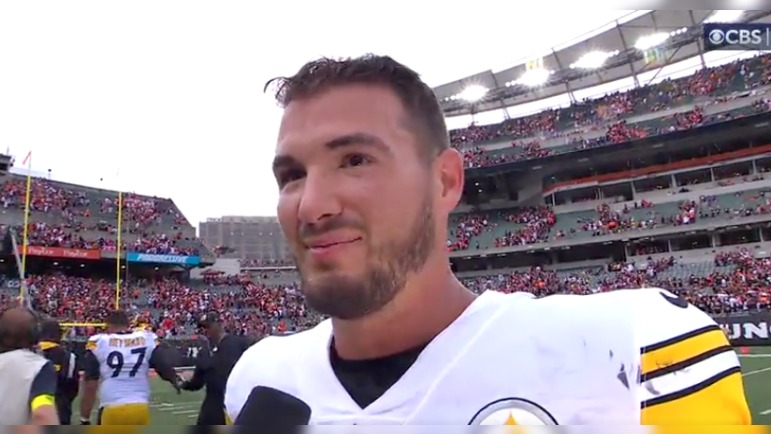 Mitch Trubisky walked out of Paycor Stadium in Cincinnati a winner in his first game as the starting QB of the Pittsburgh Steelers. Pittsburgh won a nail-biter against the Bengals by a score of 23-20 thanks to a game-winning field goal made by Chris Boswell as time expired in overtime.

The defense showed up and played a phenomenal game at the beginning, sacking Joe Burrow seven times and forcing five turnovers to give Pittsburgh short fields on offense, and even took one turnover to the house on a Minkah Fitzpatrick pick-six.

However, the offense struggled to get anything going in the running game or through the air, totaling 194 passing yards and 75 rushing yards, failing to sustain drives for most of the afternoon. QB Mitch Trubisky started out efficient at the beginning of the game, but saw his play tail off in the second half until the team’s final drive to get in field goal range.

“It could be a lot better in every aspect as well,” Trubisky said to the media in the post-game press conference which aired live on the team’s YouTube channel. “Just finding more completions, connecting down the fields, and then just continue to get the ball out to take care of the OL. So, I think I could be smarter when I use my legs and to even pick up more yards in different situations, but it’s got to be better on third down for sure. The third down is the money down for the quarterback. So, you got to stay on the field to keep the defense off, give them a break, go down, and continue to find ways to score points. So, I could be better in every aspect.”

Trubisky completed 21-of-38 pass attempts (55%) for 194 yards and a TD, finishing the afternoon with a QB rating of 78.2. While he avoided turning the ball over in this one, we saw similar play to what Ben Roethlisberger was blamed for the last couple of seasons as Trubisky often checked the ball down short, failing to connect deep and expand that passing game. He happened to miss some receivers that were open while locking on to other targets, but he did come up big down the stretch with a couple of shots down the field like this impressive catch by Diontae Johnson.

While Trubisky’s debut as a Pittsburgh Steeler left something to be desired, he did show of his mobility as a passer to extend plays by either locating his receivers down the field or simply keeping the ball himself on scramble runs. Seeing as Pittsburgh managed to come out of the game with the win, this contest will serve as a great learning experience for Trubisky and the rest of the offense as they look to take a step forward against the Patriots next week in their home opener.