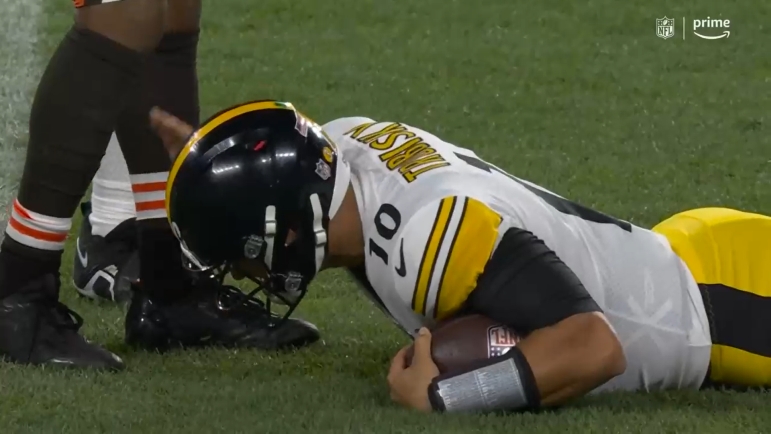 After executing offensively in the first half of Thursday Night Football, the Pittsburgh Steelers came up short against their AFC North rivals, the Cleveland Browns. During head coach Mike Tomlin’s postgame press conference, he was asked for his thoughts on Mitchell Trubisky’s performance. However, that wasn’t all. Following a performance highlighted by four punts to kick off the second half, Tomlin commented on the future of the quarterback position.

As far as Trubisky’s individual performance, commented that his quarterback did what he could but overall, everyone failed as a team.

“I thought he made some plays, man, but we all collectively came up short, and so that’s how we measure performance,” Tomlin said via the team’s YouTube channel. “Winning is our business, and we didn’t handle business. And so we don’t, you know, break that apart and look for the feel good.”

Trubisky drove the Steelers down the field on two key first-half drives, two of them ending in touchdowns during the second quarter. No. 10 himself ran one in as well, as the team led at halftime. Nevertheless, the offense came to a complete halt afterward. By the game’s conclusion, Trubisky had recorded just over 200 yards through the air (207) with zero touchdowns to his credit. Most Steelers fans, at this point, are already calling for Kenny Pickett.

In regard to Pickett, Tomlin stated that no immediate changes are taking place though we have to take into consideration that the question was posed immediately following the tough loss.

“I’m not in that mindset. I’m interested in reviewing this tape and looking at the totality of it and figuring out how we collectively get better. So the answer to that question is definitively no.”

It’s going to be a tough trip home, but after a 1-2 start, the calls for Pickett will likely only get louder after a largely uninspiring outing from Trubisky.