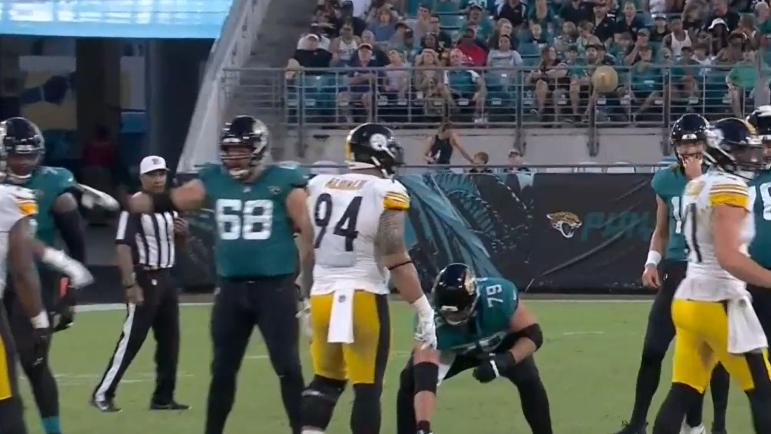 It’s never easy to learn that you’ve lost your job, or at least your position within that job, regardless of the reason. It’s even harder to hear if it’s because of your own struggles doing your job at the level that you’re used to doing. That’s where 35-year-old veteran defensive lineman Tyson Alualu finds himself now that he has been demoted to the second string for the Pittsburgh Steelers, behind Montravius Adams.

“This is a humbling situation”, he told reporters yesterday, via 93.7 The Fan. “I got to look for ways to have humility and see where I need to get better. I trust in the abilities that I have and the people around me. I know I will come out better and it will be better for the team”.

Tyson Alualu on losing starting job-"This is a humbling situation. I got to look for ways to have humility & see where I need to get better. I trust in the abilities that I have & the people around me. I know I will come out better & it will be better for the team." #Steelers

A former top 10 draft pick all the way back in 2010 by the Jacksonville Jaguars, the very fact that Alualu is even still in the league today is a testament to his abilities, because you simply don’t keep getting contracts this long if you can’t play.

Indeed, his absence due to injury last season—the first major one of his career, a broken ankle—had largely been attributed as a primary cause for the run defense taking a complete nose dive. Unfortunately, whether it’s because that ankle just isn’t the same, because he’s had a lingering knee issue, because he lost a year of football, or just because he ‘doesn’t have it’ anymore, he’s just not that same player out there right now.

Could he regain his form, or something close to it, over the course of the season? I wouldn’t put it past him. After all, he did miss nearly a whole year. Maybe his body is simply at a point where he struggles to be effective playing 30-35 snaps a game rather than 10-15, and in a reduced role will have more success.

Either way, I imagine nobody is terribly surprised. Football is not a sport that you play for decades, barring rare exceptions at certain positions. But a lot of guys make it to their mid-30s still playing at a high level along the defensive line.

“I understand this business, that’s just fuel to the fire of wanting to be the best version of myself”, Alualu said, as quoted by 93.7 The Fan yesterday speaking for the first time since his demotion. “I know if I work on that, I will be the best I can be for my team”.

Tyson Alualu said this is a motivator for him-“I understand this business, that’s just fuel to the fire of wanting to be the best version of myself. I know if I work on that, I will be the best I can be for my team.” #Steelers

After injuring his ankle, Alualu made it clear that he didn’t want to go into retirement that way, that he was committed to playing in 2022. One hopes that some way, somehow, he is able to ride off into the sunset on a personal high note—and a professional (e.g. team) one, as well.