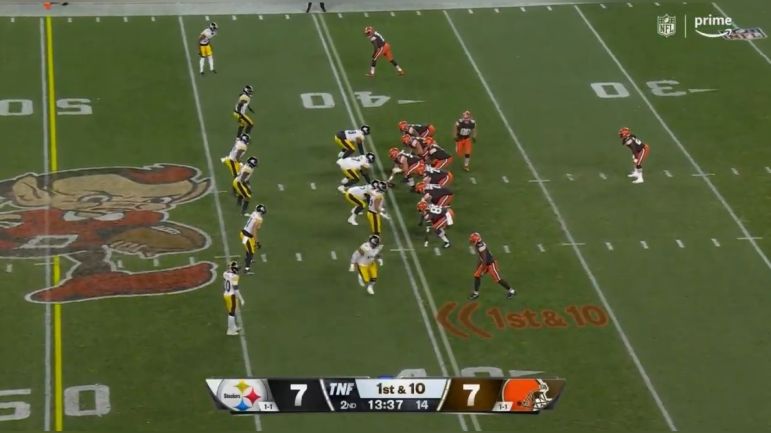 Generally, I’m not one to focus too much on things like clock and timeout management. If it’s really bad, sure, I’ll mention it but in those situations we all know it’s a bad call and there isn’t much more for me to add. But one underrated part of the Pittsburgh Steelers’ offensive problems is their poor end-of-half offense. Over the last two weeks, the Steelers have had two chances to get a field goal late in the first half. Ball around midfield, roughly 25 seconds left. And both times, they’ve come up short, unable to even trot Chris Boswell out for a long field goal try. A chance to steal points for an offense who needs all they can get.

That’s bad enough. What’s made worse is how wasteful the Steelers have been of their first half timeouts only to need them as the second quarter clock is winding down. And it’s harming this team in overlooked ways. Let’s review what’s happened each of the past two games.

This one just confuses me. Steelers’ offense facing a 3rd and 1. Steelers come out in heavy, 22 personnel with Mitch Trubisky under center. Playclock is winding down and instead of snapping the ball, Trubisky hard counts to try and draw the Patriots’ defense offsides. They don’t, they’re a Belichick-coached team so you know they’re fundamental (teams have tried to fool them before, it doesn’t work well) and the Steelers burn a timeout. Not going to take a delay of game on third and one, obviously.

It’s the team’s first timeout of the half. You won’t hear Trubisky on the hard count below but here’s a look at the moment.

After the Patriots score a critical 44-yard touchdown, the Steelers get the ball back with 25 seconds left in the half. A 23-yard completion to George Pickens is promising and gets the Steelers out of bounds at their own 48 with 17 seconds left. But the drive falls apart from there, an incompletion, and a terrible sack by Trubisky to basically end the half, leaving Pittsburgh with a fruitless Hail Mary that doesn’t even reach the end zone.

To be fair, the Steelers still carried a timeout with them into the half but still, this was bad management and there was no reason for Pittsburgh to burn that timeout on 3rd and 1. Maybe having all three timeouts on that final drive of the half changes things a bit more, knowing they have a couple to play with and can really use the middle of the field without any worry instead of immediately working the sidelines. Chances are it’s still the same outcome, no points, but this is bad process.

Here’s what it starts to get ugly. Early second quarter Thursday night against the Cleveland Browns. Steelers are in their 3-4 defense with three inside linebackers on the field: Robert Spillane, Devin Bush, and Myles Jack. But they have all 11 men on the field. With the playclock already around 15 seconds, NT Tyson Alualu is for some reason sent onto the field only to get most of the way out there, realize the Steelers have all three linemen they need and that Alualu is the illegal, 12th man. He tries to circle back and come off the field but the Browns are ready to snap the ball and could easily get a free five yards out of it. Pittsburgh’s forced to burn their first timeout instead.

Don’t know what wires got crossed here to have Alualu sent out. Typically, positional coaches are responsible for subbing their group in and out so I’m going to assume the error falls on DL Coach Karl Dunbar. A self-inflicted error.

Late in the first half. 3rd and 8 with 50 seconds left. Don’t know what the Steelers saw they didn’t like here but something with the pre-snap look causes Tomlin to burn his second timeout. Maybe he had a very good reason for it and hey, the Steelers got the turnover on downs two plays later (thanks to Amari Cooper dropping a 4th down pass) but still, you hate to see the timeout here. Less egregious than the first one but it comes back to bite Pittsburgh on the ensuing possession.

So that’s two timeouts taken because of defensive errors. Following the fourth down stop, the Steelers get the ball back with 30 seconds left on their 32 yard line with one timeout. Trubisky hits Chase Claypool on a scramble drill for 20 to get to the Browns’ 43 yard line but they’re forced to burn their last timeout with 17 seconds left.

At this point, the Steelers are trying to use the sideline and the Browns are taking it away, including on the final play of the half. Pittsburgh takes two designed sideline shots that fall incomplete but a final designed rollout to try to get 6-7 yards and give Chris Boswell a chance. But the Browns know this too and deliberately play defenders on the sideline square to the field. Looks like this. 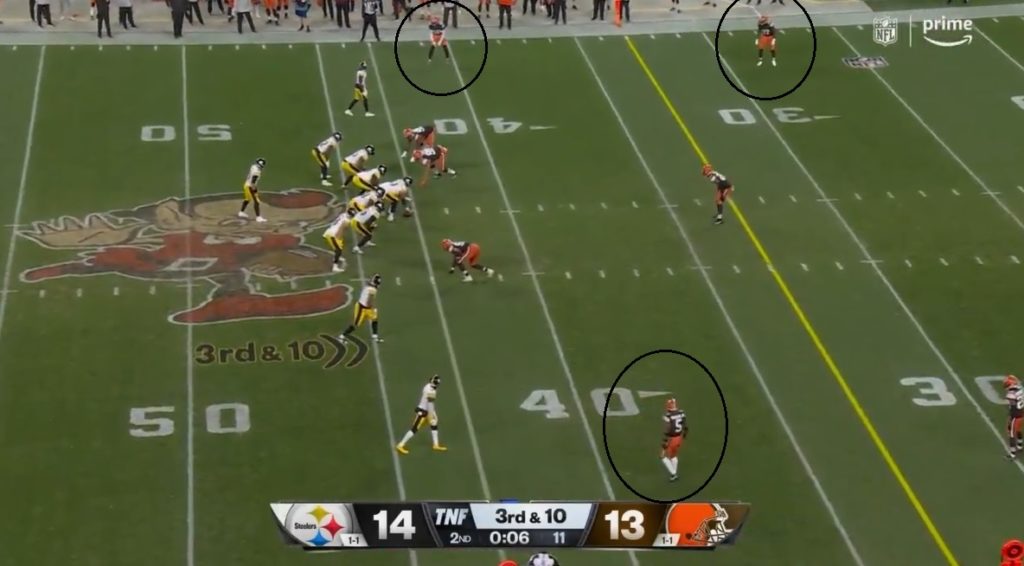 After the game, Trubisky was asked about the lack of late-half success and responded by wishing the team had more timeouts. Pittsburgh’s own errors, personnel problems, matchup miscues, a dumb decision to hard count, robbed them of their own chances. I’m betting if the Steelers had at least two timeouts for that Browns’ drive, they at least get in range for a Boswell field goal. It was a windy night so who knows if he makes it, the wind had already pushed one wide right, but three points at the end of a half would’ve been huge.

The Steelers’ offense has enough problems. They don’t need to create more with timeout trouble. It’s costing them points and they have zero margin for error to be giving any away. Those problems could fall on a lot of people but at the end of the day, they’re reflective of Mike Tomlin and the job he’s doing. Right now, it’s not good enough. Gotta be cleaned up for Week Four.