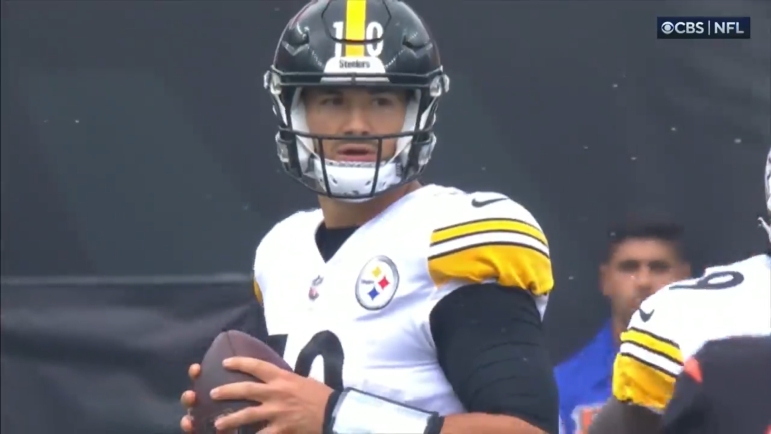 Obviously, the Pittsburgh Steelers saw a massive shift going from Ben Roethlisberger to Mitch Trubisky. In age, in resume, in mobility. But the biggest change to note three weeks in are the snap-to-throw times. Though Trubisky has been criticized for not being aggressive enough, the data doesn’t really back the notion up, he’s holding onto the ball for an eternity when compared to Roethlisberger.

Per Next Gen Stats, here are the snap-to-throw times from Roethlisberger in 2020 and 2021 compared to Trubisky three games into this season.

A stark contrast. No quarterback got the ball out of his hand quicker than Roethlisberger the last two years. Like any stat, those numbers need context and crucially, the Steelers using fewer RPOs this season is one reason why Trubisky’s number is higher. The high use of those run-pass options, plays where if the ball was thrown, the ball had to come out quick, skewed Roethlisberger’s number. But there’s also no question Roethlisberger’s diminishing mobility changed his style and compelled him to play within the pocket, hitting underneath throws and allowing for lots of YAC.

Pittsburgh’s offense this season has a much different look to it. It goes beyond having a more mobile quarterback too, though that is an element of it. As Dave Bryan has pointed out, the Steelers’ offense hasn’t had much YAC this season, relying on deeper sideline routes. Pittsburgh’s wide receivers have a grand total of 19 yards of YAC this season, a paltry number.

The three wide receivers have 19 in total.#Steelers #NFL

Trubisky has more aggressive in the Week 3 loss to the Cleveland Browns, pushing the ball downfield. Effectiveness and results were a different story, but it was anything but a dink-and-dunk type of offense.

Ultimately, very low or very high snap-to-throw times aren’t inherently good or bad. Being on the extremes generally come with consequences but there is no magic number the team is shooting for. If you’re wondering Tom Brady has the fastest snap-to-throw time this season at 2.4 seconds while Daniel Jones is the longest at 3.13. Generally speaking, the more athletic quarterbacks have higher numbers because their scramble drills skew the number upwards. But this change in Pittsburgh is one to note and one that was frankly expected, though it proves merely holding onto the ball longer doesn’t guarantee better results.