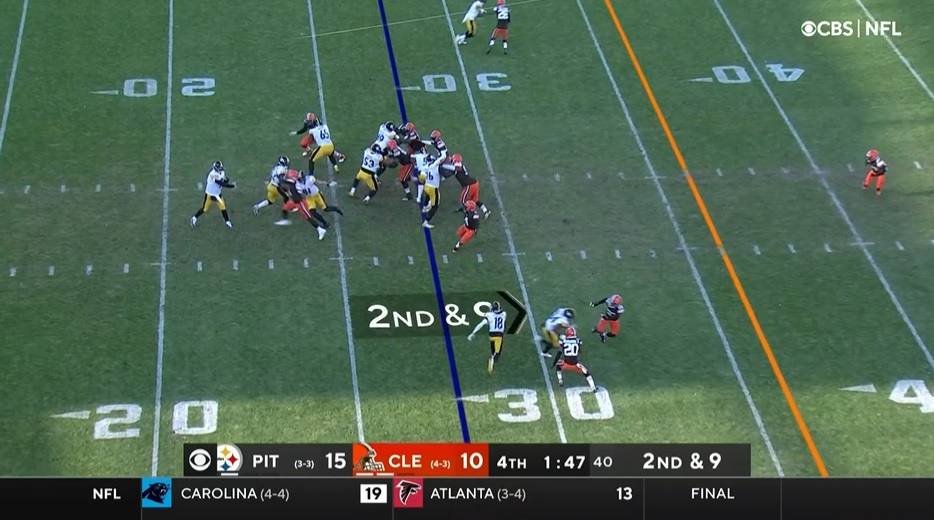 RPOs, run-pass options, have become a huge part of the Pittsburgh Steelers’ offense over the last month. It’s one of several reasons why this offense has gotten better. Still far from perfect with plenty of warts and flaws. But it’s given Ben Roethlisberger control over the offense and reduced negativity, getting them out of some ugly looks to run in.

Sunday against Cleveland, it didn’t just avoid negativity. It produced some critical plays. Twice in the fourth quarter, Roethlisberger threw complete on an RPO for a huge gain. Let’s take a look at each.

The first comes on the Steelers’ go-ahead drive. Down 10-9 without a kicker, they basically need to hit the end zone here. 1st and 10 at the Browns’ 16, the Steelers come out in 11 personnel and a pistol formation with the RB behind Roethlisberger as opposed to being next to him. Roethlisberger’s depth is also only about five yards as opposed to about 7-7.5 like in shotgun.

This RPO/packaged play is a gap run with the backside guard and tight end pulling across. For the passing component, it has a pair of slant routes to the bottom with an out route up top (these are often sight adjustments based on CB leverage).

To the bottom, the LCB is playing off coverage against Chase Claypool. That creates a free release for Claypool off the line, who doesn’t even fire hard off the snap, but makes sure to get his eyes to the QB, like he would on a hot read against an overload blitz. Roethlisberger shows handoff initially but pulls the ball away and hits Claypool on the slant. 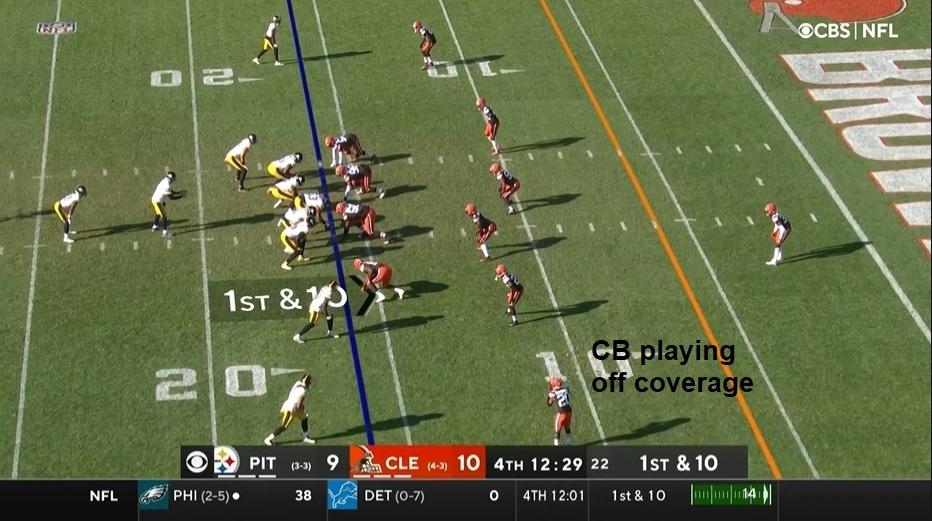 Claypool catches the ball in space with the CB bailing and getting depth, late to drive on the football. Now the Browns have to try to get him down. And it’s not easy tackling 6’4″, 230 in open grass. Claypool spins out of the corner’s tackle and runs through #33 Ronnie Harrison, fighting hard for extra yards and getting all the way down to the two yard line.

It took four more plays and a heck of a catch by Pat Freiermuth, but Claypool got the Steelers right on the goal line. And it started with the RPO, the read, that led to the YAC.

So that’s how Pittsburgh started with the lead. Now let’s look at how they made sure to end it with one. 2nd and 9, 1:48 left in the fourth, the Steelers up five. Another RPO, again out of 11 personnel with two receivers to the bottom, one up top, a 2×2 formation.

Pre-snap, Roethlisberger gets a heavy look from the Browns front, anticipating runs in the game’s final seconds. They come out in a 5-2 look with five defensive linemen putting their hands down, a tough look to try to run one (the Steelers tried similarly against the Bengals and failed). 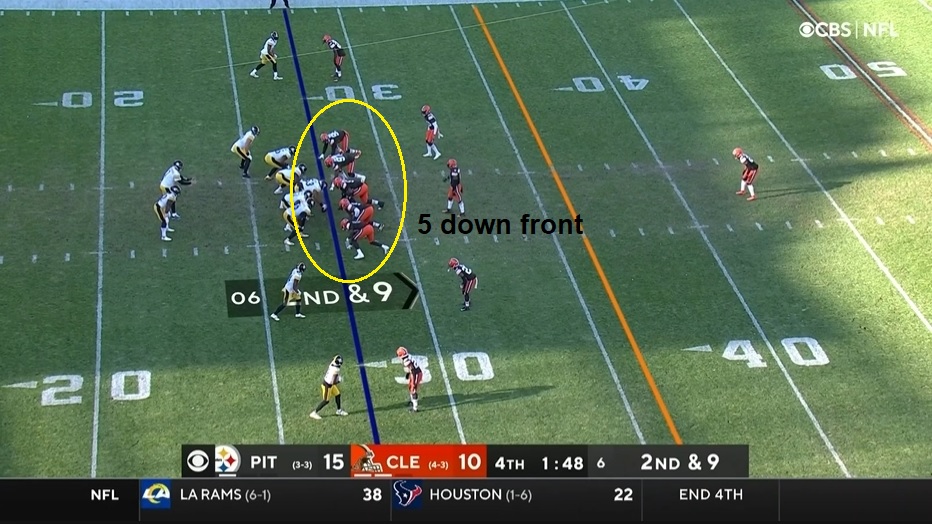 A split zone run paired with a rub route to the bottom. The rub creates a pick with Cleveland running man coverage and not passing the routes off. Ray-Ray McCloud on what the Steelers call a “chop route,” a slot fade, with Diontae Johnson running a slant underneath. The corner gets rubbed, Johnson is free, and he has a whole lot of space in front of him. 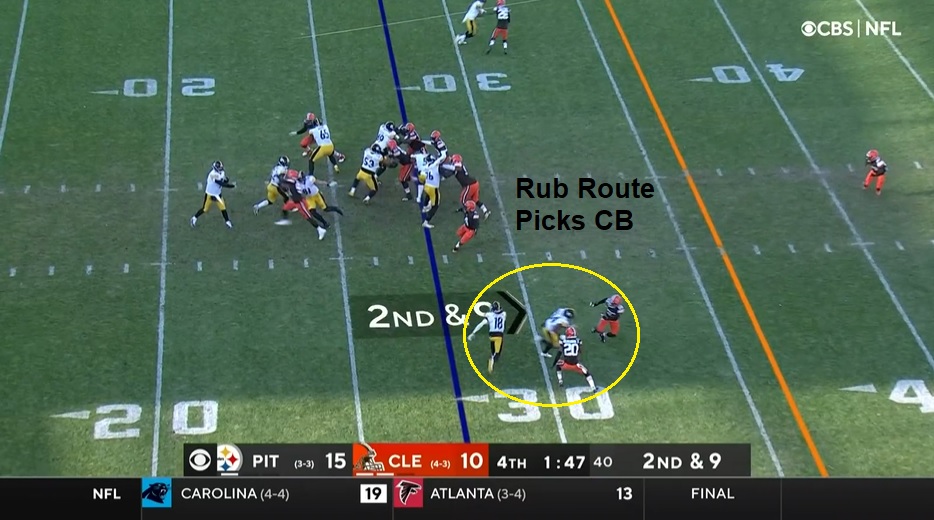 Johnson does the rest, taking off downfield and almost scoring before going down and smartly staying in bounds (perhaps hearing Chase Claypool yell at him from behind). A couple plays later, and the game is over, but make no mistake, it ended right there.

These RPOs are nothing new. First play of the game or, functionally on Sunday the last, Pittsburgh can and will call them at any time. They’ve been highly effective and efficient, and it’s nice to see some of these throws hit over the middle as opposed to the sidelines, which is where most of those throws have gone. Outs, comebacks, curls.