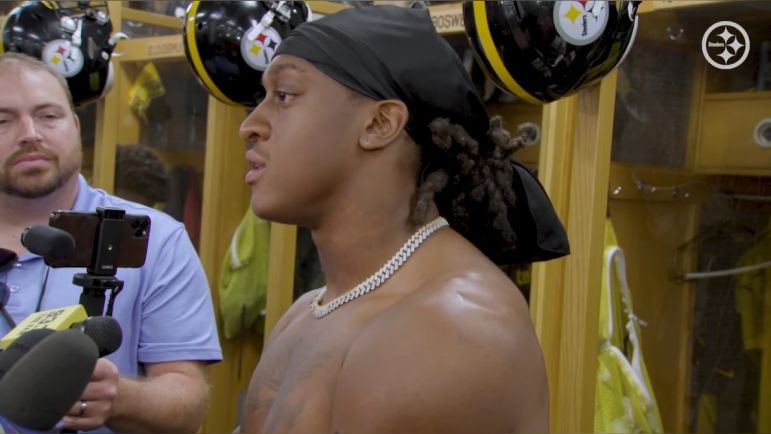 As the old saying goes, the best defense is a good offense. On Thursday Night Football against the Cleveland Browns, the Pittsburgh Steelers’ offense did not abide by the old saying. That is, after a promising first half on offense, quarterback Mitchell Trubisky and company had several three and outs and four punts. Naturally, this meant the defense was out on the field more, and presumably struggled to contain the Browns’ offense due to fatigue. When asked, the team’s safety Terrell Edmunds downplayed this notion.

“I wouldn’t say,” Edmunds said when asked on Steelers Live if fatigue was a factor in the defense’s late struggles on Thursday. “Because you’re out there, you gotta get the ball back to the offense as fast as we can. If we get three and outs, we’ll be off the field fast. So we can’t really talk about that aspect of it, because at the end of the day we have to be out there and make plays as well to give the offense as many chances as they need.”

Granted, the Steelers’ defense was far from perfect throughout the game. For a period in the first half, Cleveland and Pittsburgh exchanged two touchdown drives back to back. During this period, the offense was arguably the team’s better unit.

However, as we saw unfold Thursday, this did not last. After a promising Steelers’ drive to begin the second half was halted by several flags, the offense did not regain its first half rhythm for the rest of the game. The defense’s first drive in the second half saw them allow a 17-play seven minute drive for a Browns field goal. Following a Steelers’ three and out, the defense allowed another long drive, which served as the theme for the rest of the game and the Cleveland victory.

While it is wise for Edmunds to underplay this to the media, it may be the case that defensive fatigue due to offensive struggles was the catalyst for their second half performance. The Steelers’ first half offensive performance showed flashes. However, having three three and outs in the second half is unacceptable. For a defense without their top player in linebacker T.J. Watt, it is hard to ask for much more.