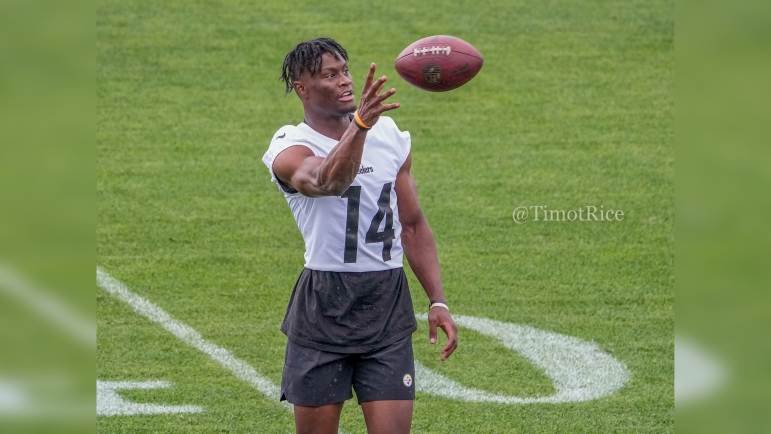 As we’ll do every week to get you ready for the upcoming game, our X-Factor of the week. Sometimes it’s a player, unit, concept, or scheme. Here’s our X-Factor for tonight’s game against the Cleveland Browns.

Last week, our X-Factors were wide receivers Diontae Johnson and Chase Claypool. Not really through fault of their own, both had pretty quiet days and the Steelers’ pass game did little to threaten the Patriots. This week, I’m talking about the other Steelers’ receiver in George Pickens. A loud summer has led to a quiet fall, just two receptions for 26 yards on only six targets, one of which was a Hail Mary at the end of the first half in Sunday’s loss to the New England Patriots. For as talented as Pickens is, that’s not good enough.

For the first two weeks of the season, Mitch Trubisky and the Steelers’ offense have repeatedly stated a desire to get Pickens the ball. So far, their words have been hollow. To be fair, Pickens isn’t a primary receiver and isn’t going to absorb 11 targets the way Antonio Brown used to do or the way Diontae Johnson does now but the Steelers’ offense must be designed to give Pickens a couple chances to make plays.

Philosophically, the Steelers have to open things up a bit. That doesn’t mean 50 yard bombs and there’s certainly truth in the Steelers’ clear idea of “take a profit” and hit the first man open underneath. That’s why Johnson is averaging under nine yards per catch and Claypool under six yards. Pickens two catches have run the gamut, a three-yarder on a sideline curl and 23-yarder running downfield last week. More of the latter is required.

Pittsburgh needs to give him at least one jump ball opportunity. For a guy who was Moss’ing Steelers’ DBs repeatedly during camp, he hasn’t been given that chance yet. The Steelers don’t have to make things complicated to give their offense a spark. When you lack talent, you need to get creative. When you have talent, you just have to let those guys make plays. If Pittsburgh can do that with Pickens, they’ll get their splash, and that could turn the tide of the game.