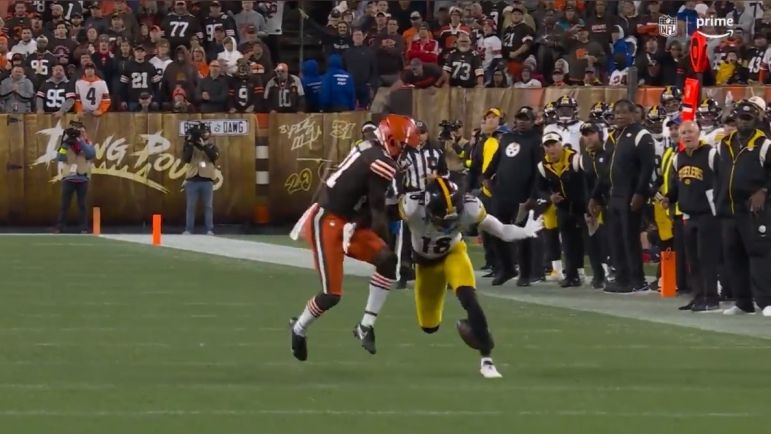 Last year, writing this article was tough as you’d have a moment in the game circled in your head from the second or third quarter and be like, “yep, that’ll be what changes the tide of the game.” Then, the Steelers, or their opponent, would storm back and two or three fourth-quarter lead changes later, you’d throw that original ‘turning point’ out the window. In the last two games, that hasn’t been the case for this Pittsburgh Steelers team as their typical late-game heroics haven’t shown up.  Therefore, I had a moment circled in my head from the third quarter, Diontae Johnson’s 3rd & 3 drop down the left sideline that went right through his hands.

Upon review, my initial thoughts were wrong. We’re going to rewind back further to halftime for this week’s turning point.

Even with a one-point, 14-13, lead over the Browns at halftime, there was still a bad taste in your mouth. Points were left on the field, from Chris Boswell’s missed field goal to not being able to give him second chance before half after being on the Browns’ 43-yard line with 16 seconds, the second time in as many weeks that a similar situation happened to end the second quarter.

Tough spots but frustrating to not get anything out of those chances. #Steelers

Steelers came out of half and after a third-down completion throw to Chase Claypool, wanted to put some focus on the running game with four-straight Najee Harris runs for 18 yards. With some semblance of a drive going Matt Canada called one of his favorite plays, the shovel pass. This was one of the few times you can say it worked to perfection, with Jaylen Warren zig-zagging his way for 35 yards down to the Browns’ 15.

It worked to perfection… until it didn’t, seeing that flicker from the yellow “FLAG” graphic pop-up at the bottom of the screen at the end of the run, something you feel like you see anytime there’s a big play for the Steelers.

As seen below, Chukwuma Okorafor was flagged for illegal man downfield. A questionable call, in my opinion, as he’s only about a yard and a half downfield as the ball leaves Tribusky’s hand. 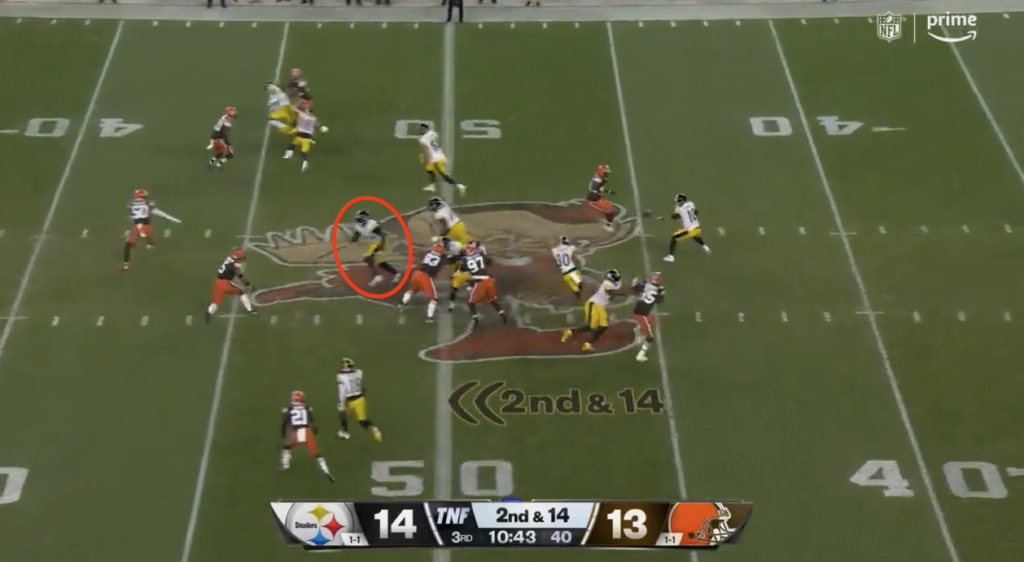 The penalty served as a killer for the Steelers. They went from being inside the red zone, looking to go up by a touchdown or more, back to their own 45 facing a 2nd & 19.

They added on to their misfortune two plays later when they decided to punt from the Browns’ 41 on a 4th & 5. Even at the time, the decision felt wrong, being uber-conservative with a struggling offense that was on the fringe of scoring position with a chance to take a much more decisive lead. However, if you’re more of an analytical person than a ‘feel’ person, those numbers said go for it too, giving Pittsburgh a 3% better chance at winning.

Instead, Coach Tomlin chose to “live in his fears” and punt the ball away, putting the game on the defense’s shoulders once again.

How did the Steelers’ defense respond? A 14-play, 70-yard field goal drive that had them on the field just over seven minutes. 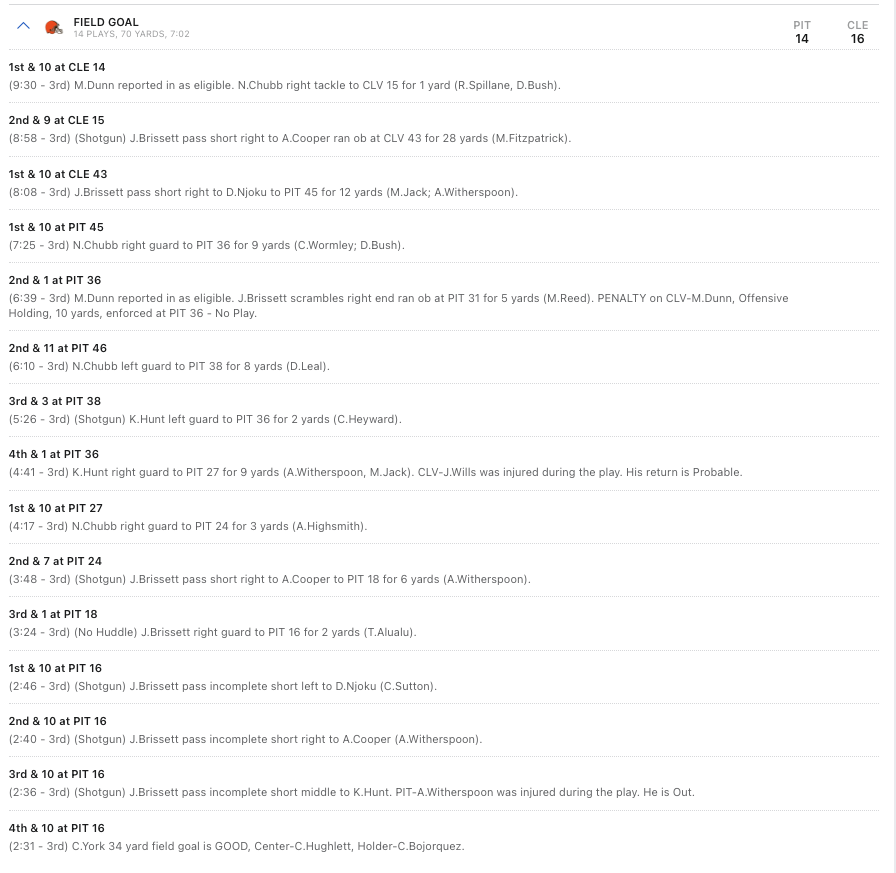 Now to the final piece of the turning point puzzle, the Diontae Johnson drop. After surrendering the lead, an answer by this Pittsburgh offense was vital as being down two possessions with this team feels like a death sentence.

They were so close to having that answer. On 3rd & 3 they dialed up a deep shot as Johnson had a 1-on-1 matchup after the one deep safety sank down into the “robber” zone. Mitch Trubisky delivered an absolute dime just before taking a big hit from Myles Garrett, but Johnson couldn’t bring it in. Definitely a tough catch, but a catch that you expect your number one receiver to make. Had he caught it, the Steelers are in field goal range and threatening to take the lead right back. Instead, they’re forced to punt it away.

The Browns took advantage of the opportunity and effectively stepped on their AFC-North rival’s throat with an 11-play, 80-yard touchdown drive that took another six and a half minutes off the clock. 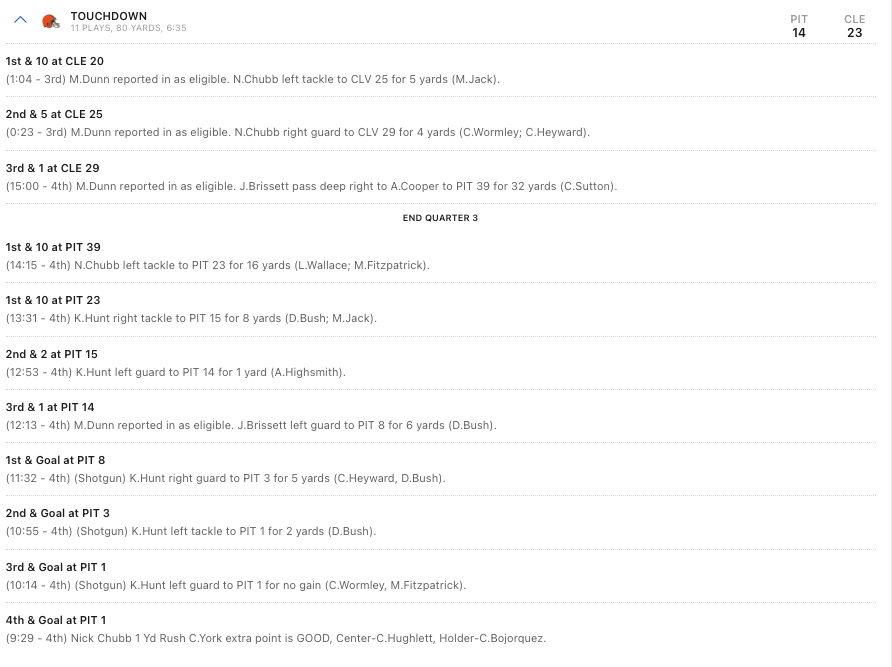 Did I mention that being down two possessions was a death sentence for this team?

Two possession game in the 4th quarter for this Steelers offense… pic.twitter.com/4WSO2vzIml