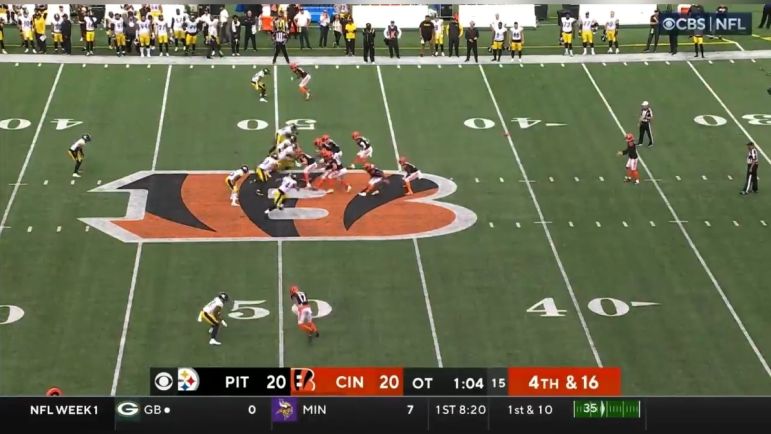 A new season is officially underway and we got our first look at this year’s Steelers roster following a massive turnover in the offseason, including the retirement of future Hall of Fame quarterback, Ben Roethlisberger. The Steelers still held true to their identity, proving no matter who is on the team they’re bound to have games that will have your doctor telling you that you should take a break from watching football for a while. Coming into Cincinnati for week one, many ” NFL insiders” had Pittsburgh written off as afterthoughts in the division. If you know the way this franchise operates, they don’t take disrespect lightly.  However, they kept quiet and let their defenses do the talking, generating four turnovers in the first half alone and grabbing another in the third quarter.

Even with all of the turnovers, the Steelers offense could not successfully pull away in either half, creating a roller coaster ride of emotion as the the two teams played a game of hot potato to see who was left standing when the music finally stopped. Pittsburgh longtime radio announcer, Bill Hillgrove, best summed it up saying,  “The Steelers Survive in Cincinnati. How it happened, it’ll take me an hour to tell you.”

With all the field goal attempts that were blocked, missed, and doinked, the turning point came on a drive that didn’t even involve one.

Following the loudest ‘doink’ of all time, with only 2:22 left in the overtime period, it seemed as if all hope was lost for a Steelers win. With that amount of time left, your mind is already saying “there’s simply no way the Steelers get another chance to win this thing.” It’s never fun when you make the realization you’re cheering for a tie as your best outcome.

If you had any hope left after the Chris Boswell missed field goal, it was likely squashed as Joe Burrow quickly turned what looked like a sack into a nine-yard gain and followed up with a QB sneak coming out of the two-minute warning to pick up an easy first-down.

After the first down is where things begin to get interesting in terms of the clock. DeMarvin Leal went down with an injury causing the Steelers to use their first of two timeouts at the 1:45 mark. 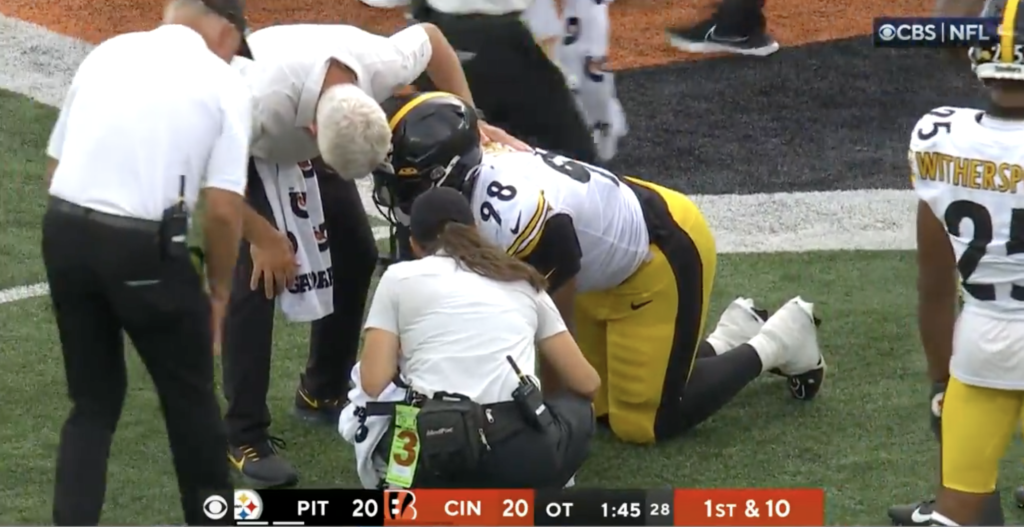 The following first down play, Terrell Edmunds is able to bang Bengals tight end, Hayden Hurst, out of bounds. Again, stopping the clock after only seven seconds.

Cam Heyward was down after this play, forcing the Steelers to use their second and final timeout of the overtime period. So with 2nd & 4 looming on the Pittsburgh 38-yard-line, the Bengals have a chance to take a large chunk off the clock with any sort of run or pass completion in bounds.

Instead, they go empty and have a quick throw-away forced by a blitzing Arthur Maulet from the left slot. This was a brutal play for the Bengals. Pre-snap Burrow knows there’s a blitz coming from the left, but instead of challenging and throwing into the zone that blitz vacated, he rolls away from it and finds nobody as a mere four seconds tick off the clock.

Defensive Coordinator, Teryl Austin, went right back to the well with another nickel blitz fro Maulet. This time he gets home, untouched, causing a Burrow fumble.

Thanks to the Holy Roller rule, an offensive fumble after the two-minute warning can only be advanced if recovered by the player that fumbled and it goes back to the spot of the fumble recovery. This effectively takes the ball out of field goal range for the Bengals. The clock is also taken back to the time of the fumble recovery, back to 1:31, before the play clock starts for the 4th-down play.

Not that the Bengals wanted to use up any more of that clock anyways.

They snapped their punt with a whole 15 seconds on the play clock AND booted it into the end zone for a quick touchback. All in all, only 8 seconds coming off the clock. 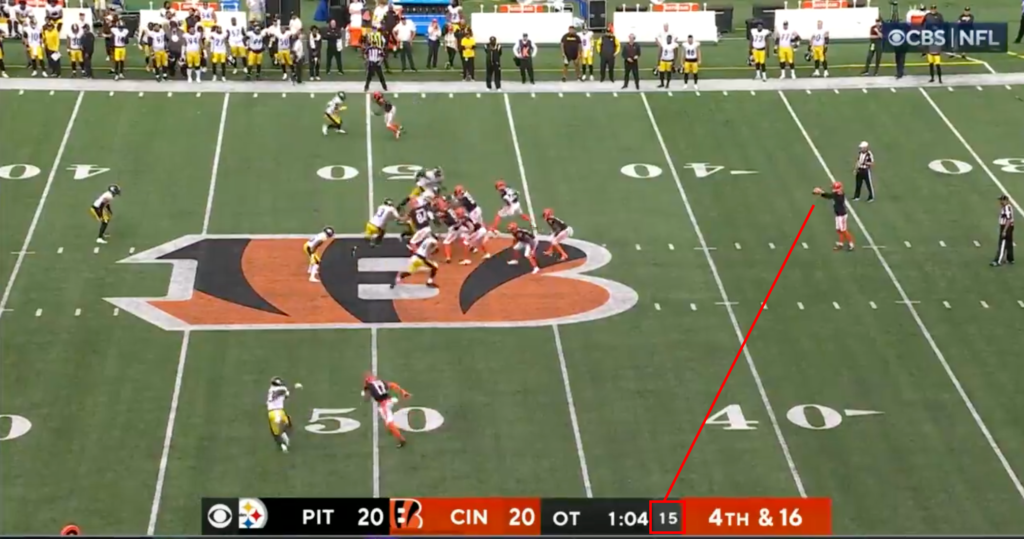 That means from the 1st & 10 after the Burrow QB sneak from the Pittsburgh 44-yard line, the Bengals only took off 49 seconds of the game clock, without the Steelers using a timeout while it was running.

I understand the Bengals may not have wanted to settle for another field goal in overtime due to the issues created on special teams team thanks to a long snapper injury, but the Bengals young Head Coach, Zac Taylor, cannot simply ignore running down the clock in this situation. Sans forcing a turnover, the Steelers had no business getting the ball back with enough time to put together a legitimate offensive drive.

Even if you don’t criticize the play calling inside of field goal range, punting the ball with 15 seconds on the play clock when the game clock is still running is inexcusable.

The Steelers made the Bengals pay for the gift-wrapped time on the clock.

On the Cincinnati 45 yard-line with 0:21 left in the game, the Steelers still had to get into field goal range. With no timeouts, they decided to attack the middle of the field with Pat Freiermuth, a play that took 13 seconds off before spiking it.

If the Steelers only had 0:06 seconds before this play, their play calling changes drastically. You never know what the true butterfly effect would be, but in this case, it all but sealed the win for the Steelers. An all-time blunder by the Bengals, one I’m sure Zac Taylor will be kicking himself for a while.