The 2022 regular season is near! As we eagerly await the Pittsburgh Steelers week one matchup against the Super Bowl participant and divisional opponent Cincinnati Bengals, I wanted to look at and provide some data points for the Pittsburgh Steelers quarterbacks. While this is preseason data, there are still interesting takeaways that could translate into the regular season. Unlike my tracking of the passing locations of the Steelers quarterbacks, today I wanted to take a look at how they stacked up league-wide in a few areas. We will also see some justifications in the data to the team announcing Mitchell Trubisky as the starting quarterback.

Let’s start with average depth of target (ADOT) and Adjusted Completion Percentage (ACP), which is the percentage of aimed passes thrown on target (completions + drops / aimed) along with number of attempts for further context: 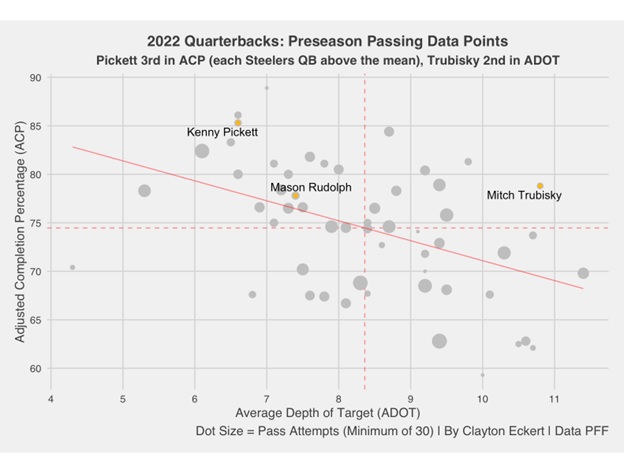 Encouragingly, each Steeler quarterback was above the mean in ACP, with Kenny Pickett having an impressive 85.3% result that ranked third out of 56 players with at least 30 attempts. My pass locations charting and his 6.6 ADOT number from PFF highlight his short targets overall (tied for 5th lowest rank), in many cases taking what the defense gave him and displaying great accuracy.

We saw Trubisky refreshingly push the ball down the field, a welcomed sight to recent seasons. He had the second ranked ADOT of 10.8 this preseason, and very hopeful this style of play remains to open up the offense and what opposing defenses have to account for in the regular season. His ACP was also respectable at 78.8% ranking 16th, a very valuable combination with a perfect example being the beautiful pinpoint pass down the left sideline to wide receiver Diontae Johnson.

Mason Rudolph was also above the mean in ACP at 77.8% which ranked 20th, along with a below average ADOT of 7.4. Very similar ACP to Trubisky, but an ADOT difference of over three yards which is important context.

Speaking of context, let’s add more with big time throw rate (BTT = a pass with excellent ball location and timing, generally thrown further down the field and/or into a tighter window) and turnover worthy play rate (TWP = a pass that has a high chance to be intercepted or a poor job of taking care of the ball and fumbling): 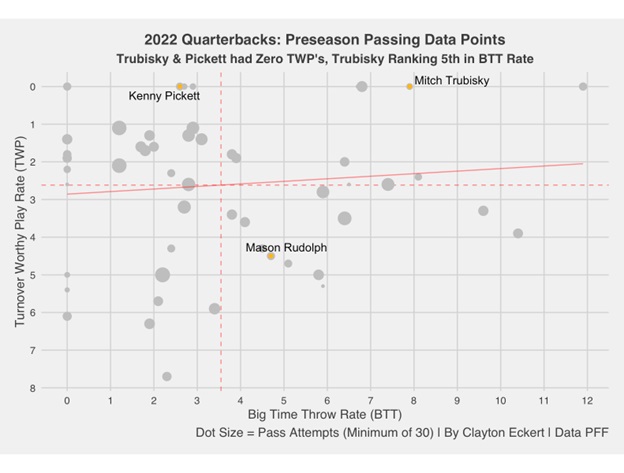 Trubisky had the best results of the Pittsburgh quarterbacks, with the fifth ranked BTT of 7.9% and no turnover worthy plays. This is encouraging, especially being one of the few passers across the league to accomplish this feat. Pickett also had zero TWP’s, but his BTT of 2.6% tied for 32nd, the lowest Steelers result accentuating the safer throws comparatively. While there were no interceptions thrown by the Steelers in the preseason, Rudolph had a TWP of 4.5% (44th) that highlights some throws that could/should have been intercepted. He did have an above the mean BTT of 4.7% that ranked 17th, so more up and down results compared to his peers.

To close, this visual adds more context to the style of play of the quarterbacks this preseason. Here are their time to throw (TTT) and sack percentages: 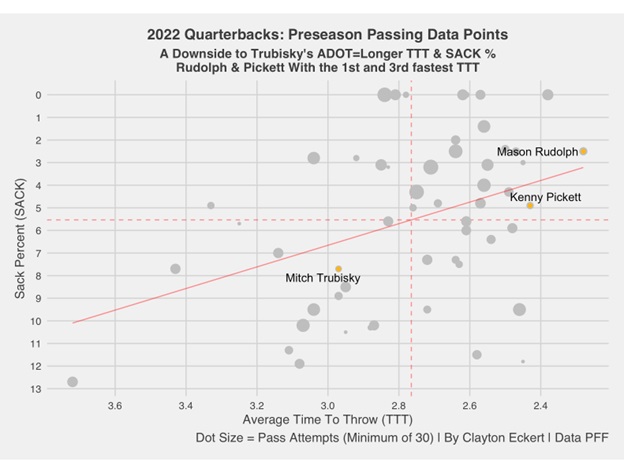 A common theme between Pickett and Rudolph was their TTT. Rudolph had the fastest time of 2.28 seconds and had the lowest sack rate of the Pittsburgh quarterbacks at 2.5%, while Pickett had the third fastest TTT at 2.43 but a higher sack rate of 4.9% which was still above the mean. As I noted on the graph, a downside to Trubisky’s ADOT is a longer TTT of 2.97 which tied for the 12th longest. This also contributes to one of the biggest concerns I have going into the regular season, with the offensive line being the weak link of the Pittsburgh offense to say the least so far. Trubisky did show great elusiveness in the pocket and escaping a few sacks reminiscent of his predecessor Ben Roethlisberger, but that is volatile and could be a thorn in the offenses side as the line hopefully gels in front of Trubisky as the season progresses.

What are your thoughts on the preseason data? Do you think the results will translate into the regular season? How will Trubisky fare as the starter? Thanks for reading and let me know your thoughts in the comments.