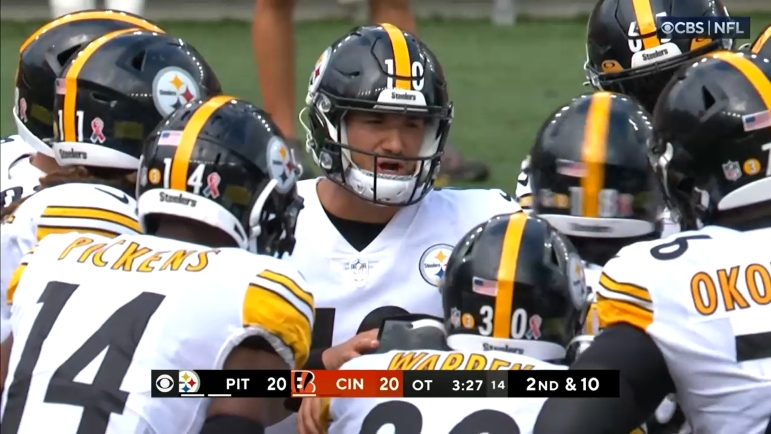 If there’s a stat you don’t want to be on the podium for, it’s your three and out rate. According to the numbers laid out by PFF’s Arjun Menon, the Pittsburgh Steelers have the league’s second-highest three-and-out rate in the NFL at 33% of the time.

Menon tweeted a graph showing each team’s rate. The Steelers are only second to the Chicago Bears, who sit at 35%.

Here's the rate at which offenses have gone three and out through 3 weeks of the season. The Bears have been not good while the Eagles have been amazing.#nflverse pic.twitter.com/E0gSTP2cqd

Pittsburgh ranks around the worst offenses in football: the Bears, Texans, Bears, Giants, and Broncos. To take it a step further, based on our charting, the Steelers have had nine second-half possessions over the last two weeks. They’ve gone three-and-out on 55.6% of them and it’s one reason why they’ve wilted towards the end of games, allowing the New England Patriots and Cleveland Browns to control time of possession and grind out clock in the Steelers’ two losses this season.

Here’s how the Steelers’ breakdown shakes out game-by-game.

Based on our data, that’s technically 32.4%, not 33%, but it doesn’t make anyone feel better. At least three such drives in every game is unacceptable. The “best” percentage comes against the Browns but saw the Steelers do it three-straight second half drives as Cleveland controlled the third and fourth quarters. It’s one reason why the Steelers rank dead last in time of possession at just 24:15 per game, a full minute worse than the 31st ranked team the Carolina Panthers at 25:15.

Comparatively, the Philadelphia Eagles have the league’s best/lowest rate, going three-and-out just 6% of the time. They’re closely followed behind by the Patriots at 7%, an offense far from high-powered but is able to sustain drives better than others. On average, the league-wide rate sits around 21%, meaning Pittsburgh is far below the average. Sunday’s opponent the New York Jets sit right at that average at 21% on the season, though they may get back quarterback Zach Wilson, who has missed the first three starts with a knee injury suffered in the preseason.