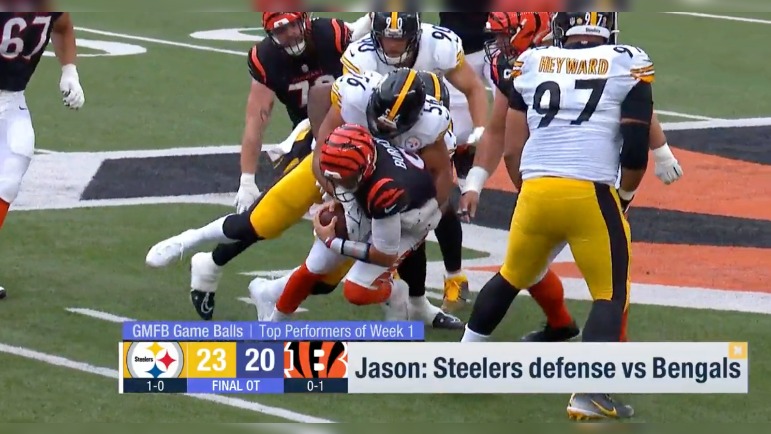 On Monday morning, the cast of GMFB on NFL Network met to talk about the aftermath of Week 1’s games, and had several segments to highlight team and player performances. One segment was called Week 1 Game Balls, where each show host awarded a figurative game ball to a player for their stellar performance during Sunday’s slate. Former NFL DB and current member of GMFB Jason McCourty decided to award his game ball to not just one particular player, but an entire unit as a whole.

His choice? The Pittsburgh Steelers’ defense.

“The Steelers defense,” McCourty said on GMFB. Regarding his game ball selection. “How could you not go with them? Seven sacks, Five takeaways, four interceptions, one fumble recovery, and one defensive touchdown on a pick six by Minkah Fitzpatrick. We talked about it in the offseason; this defense is going to have to be special. Mitch Trubisky, just don’t mess the game up.”

The efforts by Pittsburgh’s defense Sunday against the Bengals kept the Steelers in the game even while the offense struggled to get anything going throughout the contest, putting seven points on the board themselves to start the game thanks to an interception return TD by Fitzpatrick that McCourty mentioned above.

While the defense gave up 432 total yards, they held Cincinnati to 20 points after running 94 offensive plays. They kept them to only three points in the first half and started to break down after the offense sputtered in the second half while also losing T.J. Watt and Levi Wallace to injury. The front seven looked ferocious in their pursuit of Joe Burrow by constantly getting pressure inside the pocket despite the upgrades made to Cincinnati’s offensive line. The run defense contained Joe Mixon, holding him to just over three yards per carry on 27 attempts for 82 yards. The secondary made Burrow look mortal after a stellar playoff performance last season, picking him off four times.

Third sack of the game for Alex Highsmith #Steelers pic.twitter.com/WWtGtSdxOh

The Pittsburgh Steelers know they will have to play top-end defense in 2022 to win football games as the offense continues to go through a makeover at multiple positions. If Week 1 is any indication, this defense is up to the task barring that the unit can stay healthy and keep their momentum going.