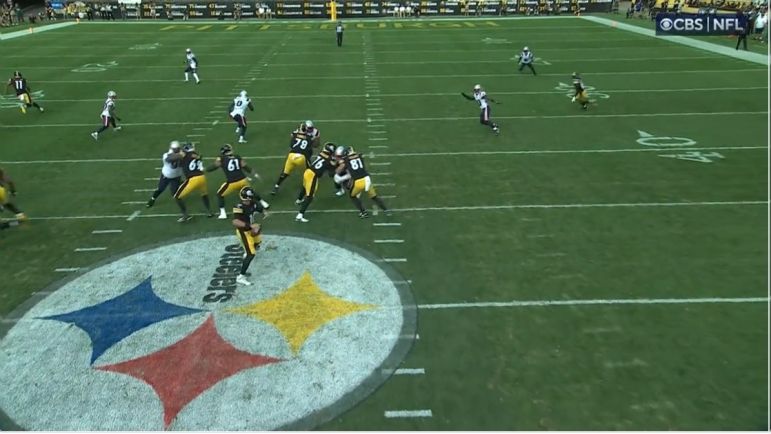 Through the first four games of 2022, three preseason contests and the Week 1 regular season opener, no Pittsburgh Steelers’ quarterback had thrown an interception. That remarkable streak came to a halt Sunday afternoon with Mitch Trubisky tossing a first-half pick, tipped by LB Mack Wilson and picked by DB Jalen Mills. Speaking to reporters after the game, Trubisky told reporters after the game.

“That was a good play,” he explained of what was going through his head. “We got Cover 2 there. I tried to force one in there. I probably should’ve just moved on the progression or check it down. Good play by that guy. I thought I could get in behind him. Forced throw and should not have done that.”

Here’s a look at the interception. Trubisky was looking for WR Diontae Johnson on a slant between two underneath zone defenders. But Wilson followed Trubisky’s eyes and squeezed the window, tipping the pass into the air to be picked by Mills.

It was one of the few times Trubisky looked over the middle, now a hot-button topic in Pittsburgh and leading to some perhaps charged remarks from Trubisky after the game. Like last year, the Steelers have found most of their success outside the numbers, mostly working curls and comebacks in this contest.

Pittsburgh’s offensive mantra is taking care of the football and through two games, they’ve turned it over once. There’s never a good time for a turnover but the Steelers giving the ball away in plus territory in a 3-0 game certainly hurt. After being +5 in turnover differential against the Cincinnati Bengals, they were -1 today and fared even worse in the TOX stat.

Pittsburgh’s winning formula is a defense that keeps the score down, an offense that takes excellent care of the football and occasionally hitting a big play while having strong special teams performances. The Steelers held the Patriots to just 17 points and special teams mostly did their job. But the turnovers hurt, Trubisky’s pick and Olszewski’s fumble and the offense failed to make up for it with any downfield splash plays. That’ll quickly need to change with the Steelers facing a short week road game, traveling to Cleveland to take on the Browns Thursday night.