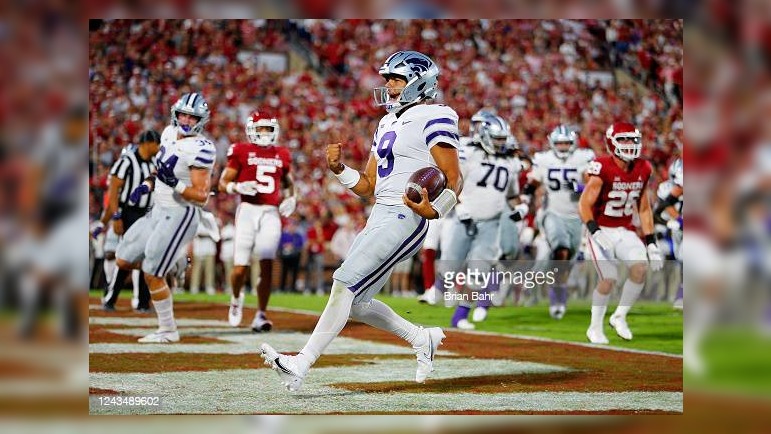 After starting out down at home against the Terps, the Wolverines battled back to win against Maryland 34-27 in the Big House.

For the second week in a row, RB Blake Corum was the headliner for the Michigan offense, toting the rock 30 times for 243 yards (8.1 YPC) and two TDs. This comes off the heels of tying the most TDs scored in a single game in program history with five rushing TDs against UCONN a week prior. The 5’8, 210lb junior plays with great balance and vision as a runner, finding the open space and makes defenders miss to pick up extra yardage. Throw in the fact that he is a capable pass catcher out of the backfield, Corum’s skill set translates well to the NFL should he choose to declare early.

#Michigan RB Blake Corum is one of the better RB prospects in the country.

Ball of energy as a runner. Pairs his loose hips and quick feet with his eyes. Also has strength in his lower body + pass-catching skills. pic.twitter.com/6jwbDw2TMr

The Huskies defeated the Stanford Cardinal in convincing fashion Saturday night, winning 40-22 to take the team to 4-0 on the season.

One NFL hopeful who had himself a game in this matchup was EDGE Zion Tupuola-Fetui. After starting the year off a little slow, Zion heated things up against the conference rival, posting four total stops, 2.5 TFLs, and 1.5 sacks. The 6’4, 260lb fifth-year junior appears to be regaining his form after suffering a dreadful torn Achilles back in 2020, flashing burst and explosiveness paired with power at the point of attack to make him an intriguing edge rusher prospect at the next level. Hopefully he can continue ramping up his impact as the season goes on and put himself into Day One consideration for the 2023 NFL Draft.

There were plenty of QBs that had impressive performances this weekend, but K-State’s Adrian Martinez managed to pull off the big upset on the road at Oklahoma while having a stellar performance. The former Cornhusker completed 21-of-34 pass attempts (61.8%) for 234 yards and a TD while also going wild on the ground, carrying the ball 21 times for 148 yards (7.0 YPC) and four rushing TDs including a long of 55 yards.

It was somewhat of a redemption party for Martinez who was touted to be the savior at Nebraska but failed to live up to the hype during his time there. Now with the Wildcats, we managed to see his athleticism on full display while also seeing signs of progression as a passer. Likely a mid-round raft prospect, Martinez presents a fascinating option in the draft as a QB that can be a developmental backup, having the physical talent to develop into a Marcus Mariota/ Tyler Huntley-like dual threat.

ARE YOU KIDDING, MARTINEZ!? 🤯

This run was UNREAL 🔥🔥

The Terrapins fell to Michigan 34-17 in Ann Arbor yesterday, but LT Jaelyn Duncan put together an impressive performance as the talented blocker looks to assert himself as OT1 in this draft class. The 6’6, 320lb senior looked every bit like a franchise LT against the heightened competition of the Wolverines, keeping QB Taulia Tagovailoa clean in the pocket while also getting out in space in the running game, pulling from the tackle spot and picking up linebackers and defensive backs in the screen game.

He appeared to battle a minor injury throughout the contest but left the game in good shape playing the final minutes. Duncan continues to check all the boxes and if things continue, we could see hem cement himself in the top half of the first round come spring.

The Maryland OL has come to play today against Michigan giving Taulia Tagovailoa all day. Left tackle Jaelyn Duncan is a stud—such a good job mirroring the defender with his lateral agility while using his hands to stymie the pass rush. pic.twitter.com/Oiw3Sz3S0K

The Clemson Tigers and Wake Forest Demon Deacons took part in a barn burner in Winston-Salem yesterday with the Tigers coming out on top 51-45 in 2OT.

While Clemson won the game, both QBs deserve recognition after impeccable performances. Wake Forest QB Sam Hartman made good being suggested as the player to watch against a stout Tiger defensive front, completing 20-of-29 pass attempts for 337 yards and six TDs. He was surgical with the football, shredding the opposing defense as he would quickly move the offense down the field with get touch and accuracy. He tied the ACC single-game passing TD record Saturday and looks to be proving doubters wrong that state he isn’t an NFL-caliber QB.

On the opposite sideline, D.J. Uiagalelei had himself quite the game as well, completing 26-of-41 pass attempts for 371 yards and five TDs while chipping in another 14 carries for 52 yards on the ground. Uiagalelei appeared rattled and scattershot for a majority of the 2021 season and at times to start 2022, failing to capitalize on the immense hype and potential he was touted with as the successor to Trevor Lawrence in Death Valley. However, he appears to have redeemed himself, showcasing his stellar arm talent and improved decision making in a back-and-forth game that came down to the wire.

It will be interesting to see if Uiagalelei does declare early, but as a QB that got written off in a strong QB draft class, it looks as if he just squarely put his name back into the mix of top passers draft-eligible in 2023.

DJ Uiagalelei throws a laser to notch his second TD of the day 👀 pic.twitter.com/fcpBZ2W2f5