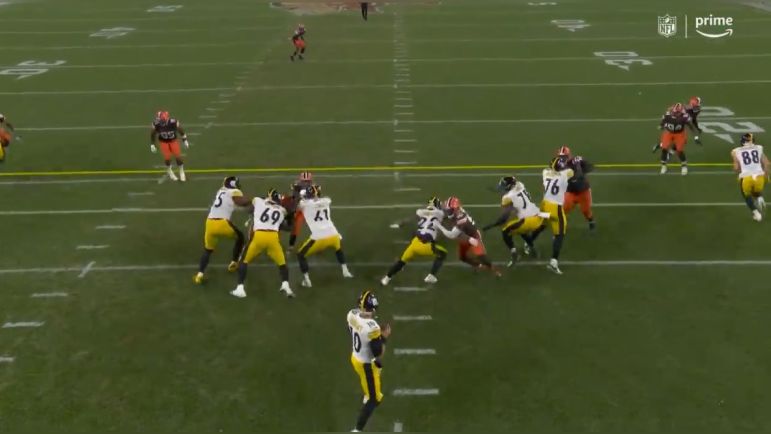 Breaking down the lone sack the Pittsburgh Steelers allowed in Thursday night’s loss to the Cleveland Browns.

One of Pittsburgh’s eight failed third down conversions against the Browns. Cleveland is showing sim pressure by mugging both ILBs into the A gaps to stress the Steelers’ protection. But Pittsburgh has sick into block against a potential six man rush so they are “safe.” There’s no need to have a hot read/throw. Here’s the pre-snap blocking assignments.

Cleveland rushes just one ILB and drops out both defensive ends on the snap of the football. Pittsburgh is in the right position and no one misses an assignment. Najee Harris is responsible for the LILB, #50 Jacob Phillips, away from the center’s slide and is in the correct spot to pick him up.

But Harris does a poor job executing and never gets a good punch into the linebacker, who easily sheds him and pressures Trubisky. Flushes him left but he doesn’t have the speed nor anyone open to get the ball away. Phillips sacks him from behind and the Steelers, again, punt.

Pretty clear-cut blame as you’ll see blow. While it might look a bit funny seeing the OTs not really block anyone, this is the sim pressure. Create 1v1 matchups while still only rushing four. The tackles have to respect the threat of them rushing but ultimately can’t help out much in terms of the actual protection. Harris, a normally solid pass protector, had a bad rep here and it cost the Steelers. Sack falls on his shoulders.

Pittsburgh has struggled against these sim looks. A 3rd down failed conversion last week and this sack here. One reason why this team is struggling so much on possession downs.