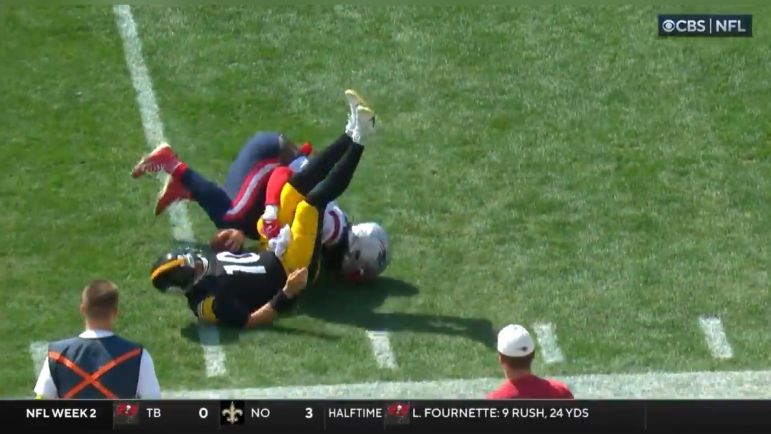 As we’ve done for several years, we’re breaking down all the sacks allowed by the Pittsburgh Steelers this season. After missing Week One, I’m combining the one sack allowed against the Cincinnati Bengals and the three given up to the New England Patriots in Week Two. We’ll assign blame and also count up penalties below.

Max protection here with a two-man mirrored route, George Pickens and Diontae Johnson running vertically. But it’s a boom/bust concept and the Bengals are playing Cover 2 behind it, taking away anything vertical. With the benefit of hindsight, a bad playcall, and I have to guess the Steelers were expecting a different coverage, probably single-high so they could take a 1v1 shot down the sideline. 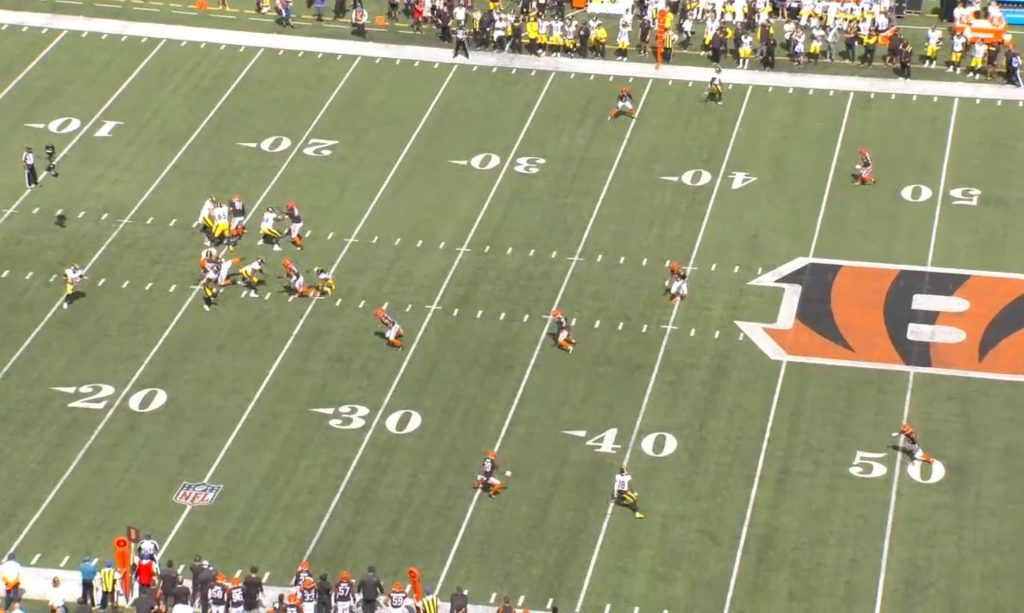 There’s nothing here for Trubisky at this point and I cant’ fault him for that. What I can fault him for is not throwing this ball away. There’s nothing there and everyone knows it. Two-man route, corners are sinking with no other threats, the safeties over the top. Throw the ball into the fifth row and move on. Trubisky instead tries to fruitlessly keep the play alive and is soon run out of bounds, taking a two-yard sack instead of the incompletion. It’s not a huge loss but a pointlessly negative play and one that should’ve easily been avoided. I’ll put half on a bad playcall to put the Steelers in a no-win situation but Trubisky made a mental error here, too, and deserves blame for the actual sack that gets included on this list.

Blame: Half on Matt Canada, half on Mitch Trubisky

Playaction here. Split flow wheel route attempted to George Pickens. Second time of the game the Steelers attempted this play, hoping to hit the wheel after Trubisky hit Pat Freiermuth in the flat on this concept earlier in the game. The problem here is Pittsburgh doesn’t do anything to draw this one up any differently than the first time, as we showed in Tuesday’s breakdown, and the Patriots aren’t fooled here. Trubisky doesn’t fully roll out in the second and sets his feet to – I assume – hit Pickens if he’s open, but he’s covered and isn’t an option. The flat isn’t even available here and harder to throw with Trubisky’s drop stopping instead of him rolling out. He bails left, for reasons I’m not quite sure because there’s no receiver going that way, and gets dropped.

A bad playcall by Canada for trying to run the same exact concept out of the same exact look though again, I’m not sure what Trubisky was trying to do at the end here. I’m going to put this one fully on Canada though.

I’ve already talked about this play for how brutal of a sack it is. 2×2 look with Trubisky reading the field side first. He has #2 WR Chase Claypool open on an out route and it is wide open. The Pats are in man coverage, the NCB trailing, and Claypool should easily pick up this first down and potentially get into the end zone. 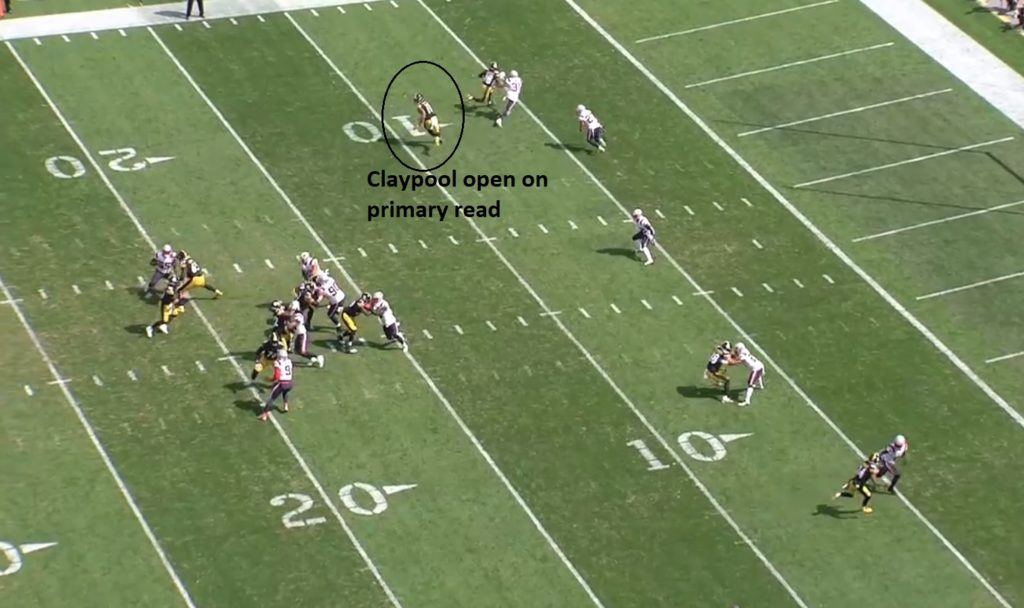 For some reason, Trubisky doesn’t pull the trigger, feeling the pressure and turtling, taking the sack. Just a terrible play here and there’s a good chance this took four points off the board in what turned out to be a three-point loss. They came back to this concept on the next drive and Trubisky hit Claypool for the first down but this first mistake shouldn’t have happened and it was a critical error. The blame is easy to place here.

After a nice completion to George Pickens, the Steelers are trying to get into field goal range to save a little face after allowing a 44-yard touchdown to Nelson Agholor late in the half. They’re potentially in range but this Trubisky sack thwarts any chance to get into Chris Boswell’s range.

Another 2×2 formation with Pat Freiermuth running a quick out to the sideline. That’s where Trubisky’s eyes first go and Freiermuth is plainly open, the Patriots’ DBs colliding in man-coverage as the route combination is trying to goad them into doing. 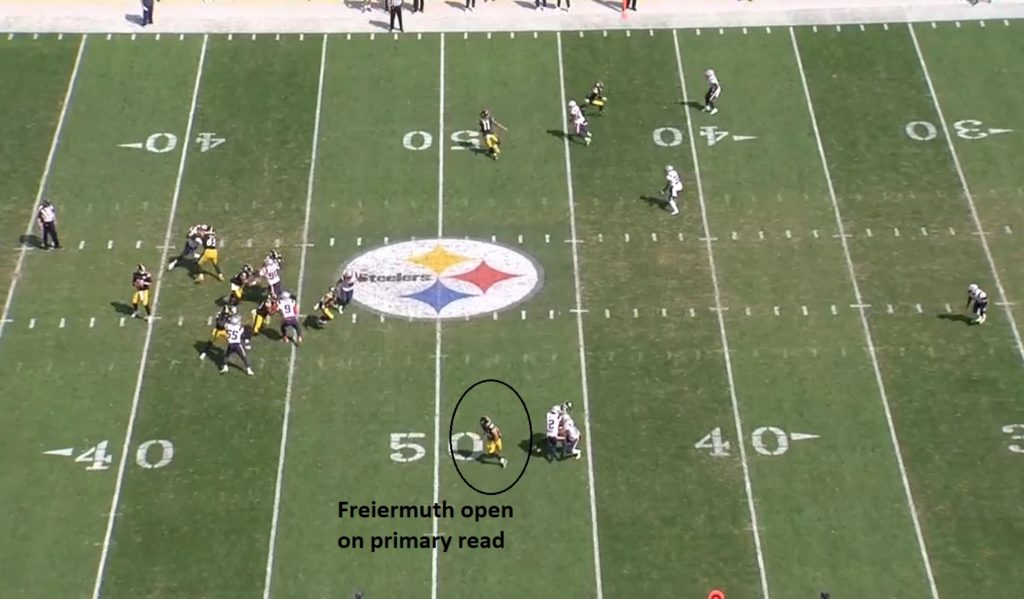 For some reason, Trubisky comes off the read and begins running to his left. He’s chased down by Matthew Judon before he’s able to get out of bounds, a loss of seven, and forcing the Steelers to burn a timeout.

Another chance for Trubisky to throw the ball away, though this is harder running to his left with the ball in his left hand. But it shouldn’t have even gotten to that point and Trubisky should’ve hit Freiermuth for probably a sizeable gain up the sideline with the Patriots’ DBs running into each other. A missed opportunity and reason why I’m more concerned about Trubisky missing things underneath as opposed to the lack of vertical shots.