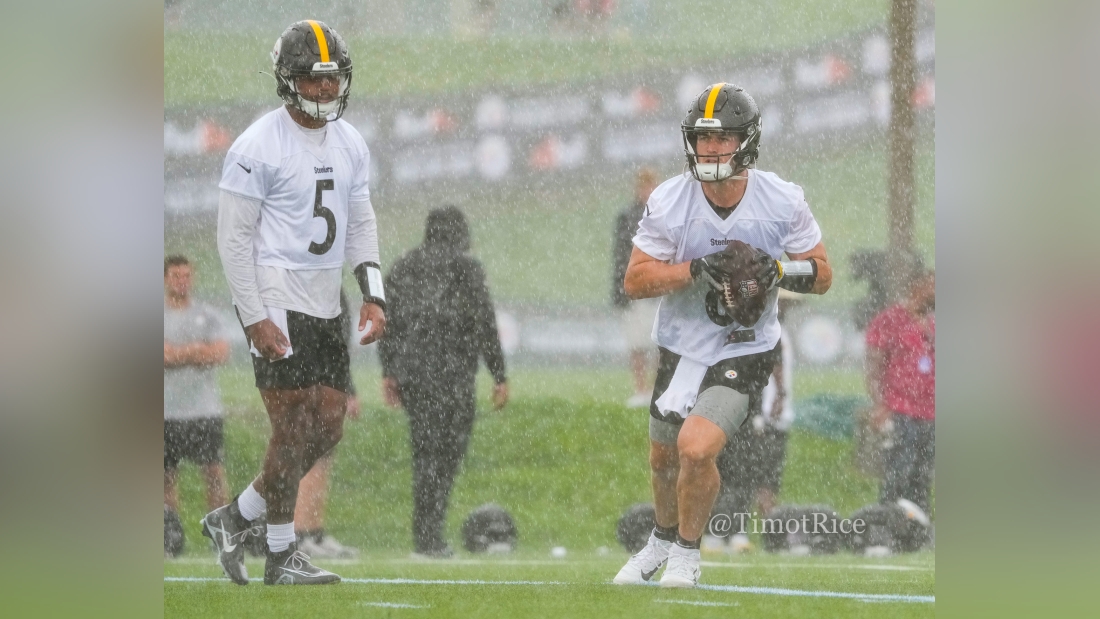 Ben Roethlisberger led the Steelers at quarterback from 2004 to 2022. This year, the Steelers will have a new quarterback. The question is when will the next Steelers franchise quarterback emerge and is he on this season’s roster.

The Pittsburgh Steelers have just two franchise quarterbacks in their long history. Terry Bradshaw and Ben Roethlisberger helped earn six Lombardi Trophies for the Black and Gold. From 1970 to 1982, Terry Bradshaw started 157 of 185 regular season games played by the Pittsburgh Steelers. He appeared in ten games as a backup. Terry Hanratty and Joe Gilliam filled the backup role from 1970 through 1975. Then Mike Kruczek backstopped from 1976 to 1979. Pittsburgh selected two quarterbacks in the 1980 draft. Mark Malone in the first round and Cliff Stoudt in the fifth. Hanratty started 12 games during the Bradshaw era. Gilliam made seven starts. The Steelers won all six games Mike Kruczek started in 1976 but never threw a touchdown pass. Bradshaw started every game from 1977 through 1979. Then Stoudt picked up a start in 1980. Mark Malone started two in 1981 both narrow losses.

Here are some statistics for backup quarterbacks that started games during the Bradshaw era:

In fact, Bradshaw’s last season as a fulltime starter was in the strike-shortened 1982 season. He started all nine games but began his final season on the bench due to injuries. He completed 28 of 39 passes for 325 yards and two touchdowns in his final playoff appearance. But his two interceptions contributed to a 31-28 loss to the San Diego Chargers. Bradshaw had offseason elbow surgery. So, Cliff Stoudt started the first 14 games in 1983. Bradshaw started the next game against the New York Jets. But he reinjured his elbow throwing a touchdown pass to Calvin Sweeney to stake out a 14-0 lead. He left the game never to play again.

Here are the statistics for those thirteen interim starting quarterbacks:

Neil O’Donnell and Kordell Stewart lead this group. But even with a Super Bowl and several playoff seasons neither qualifies as a franchise quarterback.

Ben Roethlisberger anchored the Steelers from 2004 through 2021. He started 247 of 289 regular season games during that span. That’s over 85% of the games. He also came in off the bench in his NFL debut and later in 2015. He started all regular season games four times: 2008, 2013, 2014, and 2018. Eight back-up quarterbacks started 42 games during the Roethlisberger era. Tommy Maddox was not technically a back-up in 2004 but soon became one. He started five games 2004-2005. Charlie Batch started nine games between 2005 and 2012. Dennis Dix got three starts, Byron Leftwich one, Michael Vick three and Landry Jones five. Then Duck Hodges got five six starts in 2019 when Ben went on injured reserve after the second game. Mason Rudolph started eight games in 2019. Then one each in 2021 and 2022.

Here are some statistics for backup quarterbacks that started games during the Roethlisberger era:

Mason Rudolph remains on the roster. But the Steelers acquired veteran Mitch Trubisky during the offseason. Plus, Pittsburgh drafted Kenny Pickett in the first round. Currently, Mitch Trubisky appears set to start week one of the 2022 season. But will Mike Tomlin opt to start Kenny Pickett at some point in the season? The Roethlisberger era has ended. Will one of these quarterbacks start one of their own or just be another name on a list on interims starters?

I always like to include a bit of music. It’s the end of an era and looking to find a new one. Here is End of an Era by the Strumbellas.