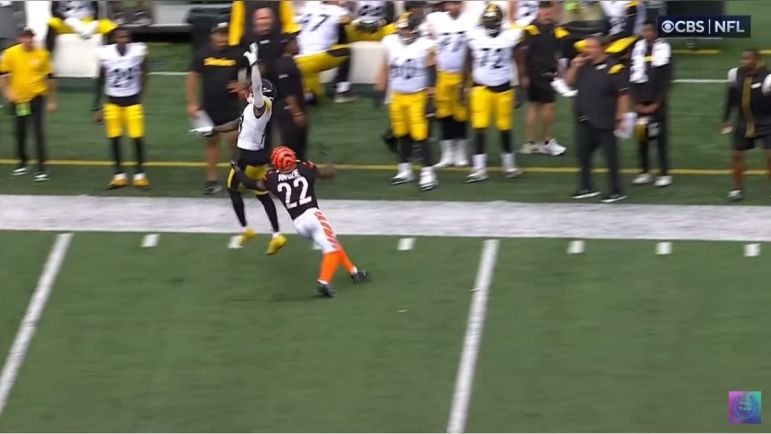 In the last matchup against the Pittsburgh Steelers, the New England Patriots were able to roll out a cornerback duo of Stephon Gilmore and J.C. Jackson to combat the Steelers’ deep, talented wide receiver room.

Of course, that was in 2019 — the year that Gilmore went on to win the NFL’s Defensive Player of the Year Award.

Fast forward to the present, neither player is at the disposal of Patriots’ defensive backs coach Mike Pellegrino, as Gilmore is now in Indianapolis and Jackson signed with the Los Angeles Chargers in free agency in March.

That will make things difficult for the Patriots against a receiving corps that Pellegrino highly respects. Speaking with reporters earlier in the week, Pellegrino praised the Steelers’ wide receivers, calling it a really good group that he respects a ton.

“This group is a really good group. You have Diontae Johnson there, (Chase) Claypool, (George) Pickens. Those guys are extremely talented guys, big guys, Pellegrino said, according to Steelers.com’s Teresa Varley. “You also have (Miles) Boykin, (Steven) Sims, and Gunner (Olszewski) as well that complement the group very well. I would say for the most part the challenge is throwing off the football. They do a really good job of that. Making contested catches situation. We have to play our best and play our game.

“I respect this Pittsburgh group a ton, Claypool, Johnson and Pickens. They’re a very talented group,” Pellegrino added. “They have great hands, great dynamic, ability with the ball in their hands, they do multiple things in the field. Their stems are very good, the way they set up their routes. It’s a real good challenge for us and I am excited to see our group go.”

Top to bottom, it is a really good wide receiver room in Pittsburgh. Johnson is the true No. 1 in the offense, the guy who makes everything go in the passing game from the receiver position. He is a guy that draws coverage his way, is one of the best route runners in football and sees a ton of targets.

Claypool and Pickens are an intriguing combination due to their size and physicality, especially with Claypool playing primarily in the slot where he can use that size, speed and strength to his advantage.

As for the rest of the depth chart at receiver, Boykin, Sims and Olszewski all bring unique elements to the table within the Steelers’ structure. That’s what makes it such a good, challenging group overall in Pittsburgh.

After dealing with the dynamic Miami Dolphins’ receiving corps last week, featuring the speedsters in Tyreek Hill and Jaylen Waddle, it will be a much different challenge in Week 2 for the Patriots’ secondary under Pellegrino. How the Patriots deploy top cornerback Jonathan Jones on Sunday will be telling, especially with young players like Myles Bryant, Jack Jones and Marcus Jones taking on larger roles in the secondary early in the season.