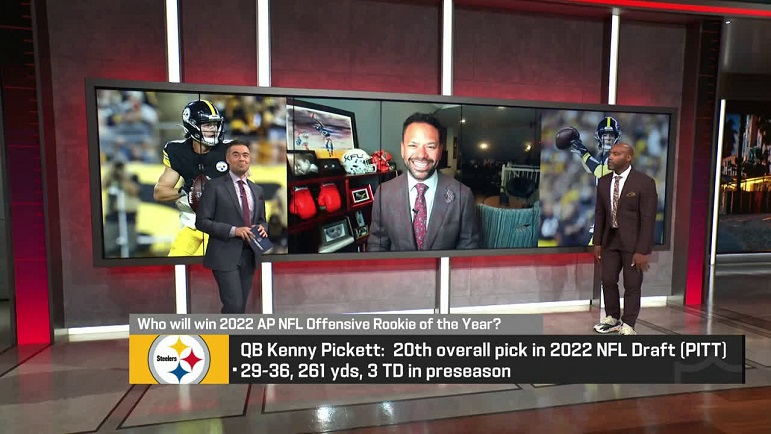 NFL Network’s DeAngelo Hall doesn’t think Pittsburgh Steelers’ quarterback Kenny Pickett will start the year. But he believes Pickett not only will end the year as the team’s #1 quarterback, he’ll play his way to rookie of the year status. An NFL Network panel made their picks for Offensive/Defensive Rookie of the Year with Hall choosing Pickett to take home the hardware on the offensive side of the football.

“He’s a quarterback that’s not starting right now but at some point I think Kenny Pickett will get his opportunity sooner rather than later,” Hall said.

Mike Tomlin’s made no official announcement but Pickett is likely to become the team’s #2 quarterback to open the season behind Mitch Trubisky, signed over this offseason from the Buffalo Bills. It then becomes a question of how quickly Pickett could take over. That’s all dependent on Trubisky and the Steelers’ performance. If Pittsburgh is competitive and Trubisky holds his own, a quarterback change is doubtful to occur. If the offense struggles, Pickett could earn his first start this season.

Hall went on to praise not only Pickett’s opportunity but his strong showing this summer.

“This dude showed great command of the offense in the preseason. I know he got a couple vanilla looks but that’s all the Steelers need is a game manager at this point. They have a strong defense.”

Pickett had a fantastic camp and shined bright in the team’s three preseason games with an 80% completion percentage, end of half/game touchdown drives, and zero turnovers. As Hall references, Pickett was composed and poised with plus accuracy and anticipation, all the traits that got him drafted as the first quarterback off the board.

“And so I think Kenny Pickett will rack up some wins and that production from the quarterback position I think will land him [the award.]”

While Pickett is considered one of the favorites for the award, he wouldn’t be my frontrunner. Tomlin is likely to show more patience with Trubisky than many think and though Pickett has reasonably good odds to play this year, it may not come until late in the season. Even a half-season of starting would be a ton of ground to catch up on the rest of the rookies, including teammate George Pickens, who will have an immediate role in the Steelers’ offense.

While quarterbacks have the volume stats to vault themselves into Rookie of the Year candidacy, history says those winners have been passers who started most if not the entire season. Since 2010, here’s the number of starts made by each QB who won OROTY:

In fact, over the history of the award, only one quarterback has been named Rookie of the Year who didn’t start their season until Week 4 or later – Vince Young In 2006, who didn’t start until the fourth week. He threw more interceptions than touchdowns and won it because of his rushing ability.

Granted, this year’s field of rookies is much more wide open and there aren’t any other rookie quarterbacks in line for immediate playing time, though Atlanta’s Desmond Ridder figures to see action sooner than later. But there are plenty of receivers who could make noise: Drake London, Chris Olave, Garrett Wilson, and Pickens along with running backs like Kenneth Walker and Breece Hall. History says Pickett won’t come away with the award though Steelers’ fans will be elated if he bucks that trend.