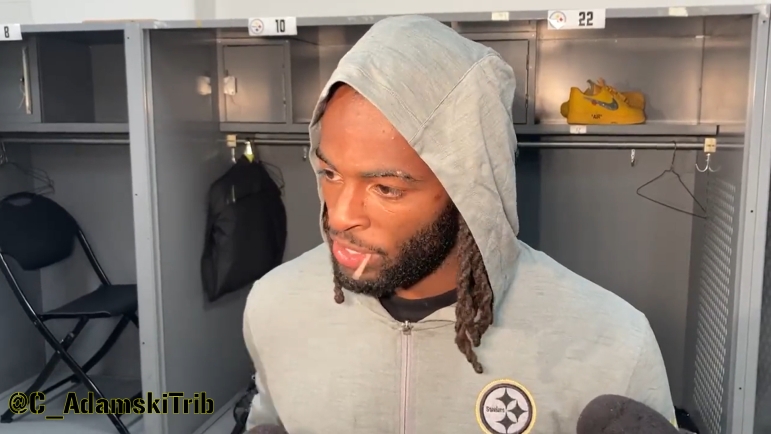 After the Pittsburgh Steelers took to the locker room Thursday night after a disappointing 29-17 loss to the Cleveland Browns, the media soon followed the players inside to interview them about the event that just transpired.

When RB Najee Harris was asked about his takeaways from the game on the offensive side of the ball, he made sure to give the big guys locking him a shoutout before saying the skill guys need to come up big in the crucial moments to secure victory.

Najee Harris compliments the Steelers O-line, says the skill position guys have to be better pic.twitter.com/6HhW9HwDP6

“The O-Line played really well,” Harris said in the locker room to the media after the game Thursday on video from Chris Adamski’s Twitter page. “The past couple weeks the O-Line has been playing really well. But like you said, we’re just all trying to find the rhythm and the groove, and you tip your hat off to the O-Line, but some of the skill players have to do better and we have to come together as a team and rally up and find ways to put points on the board.”

Harris made sure to credit the offensive line multiple times in his postgame presser, and the unit has played better in recent weeks. The was Harris’ best game on the ground thus far as he totaled 15 carries for 56 yards (3.7 YPC) while backup RB Jaylen Warren did even better from an efficiency standpoint, toting the rock 4 times for 30 yards.

QB Mitch Trubisky also has several occasions where the pass protection allowed him to sit in the pocket for several seconds to go through his reads and make a play in the passing game. Still, while the OL played better than in recent weeks, the offense continued to sputter as Trubisky missed several opportunities down the field and the receivers dropped a few balls on the night, taking away chances to pick up first downs and put more points on the board.

After scoring back-to-back TDs in the second quarter, Pittsburgh was held scoreless for most of the second half outside of a field goal to make it a one score game with a 1:25 left in the game. While the OL along with other skill position players and Trubisky showed some improvement in this game, all still need to take a notable leap forward to take this offense where it needs to go as a consistent unit that can sustain drives and avoid three-and-out situations which doomed them in the final moments of the last two games.