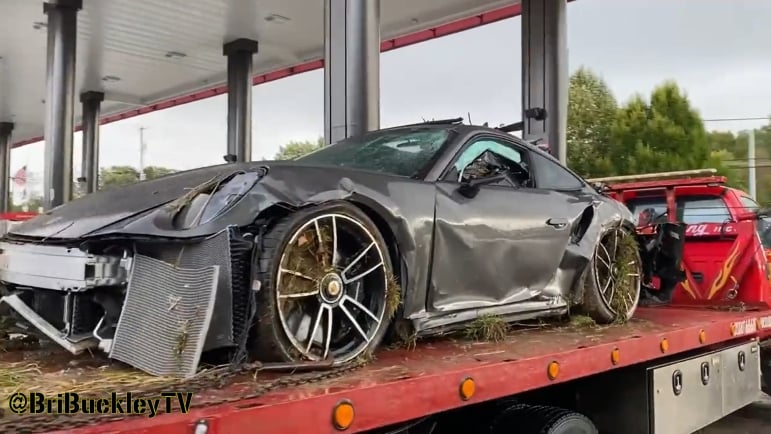 Cleveland Browns star edge rusher Myles Garrett suffered injuries sustained in a single-car accident yesterday as he and a female passenger were driving after leaving practice, as has been previously reported.

While his injuries were described as “non-life threatening”, and he was discharged from the hospital, his agent, Nicole Lynn, communicated via social media last night that “While we are waiting to learn the extent of his injuries, he has been alert and responsive”.

Earlier this morning, Tom Pelissero reported new details relating to the single-car crash, which saw his Porsche flip over several times before coming to a stop. He writes that Garrett “swerved to avoid an animal on a wet road and overcorrected”. It was previously reported that impairment, such as from alcohol, had already been ruled out.

#Browns star Myles Garrett was discharged from the hospital Monday night, per source.

More tests coming. The good news is Garrett’s injuries aren’t life-threatening. He swerved to avoid an animal on a wet road and overcorrected. Car flipped multiple times. Could’ve been worse.

We still don’t know exactly what Garrett’s condition is precisely, and whether or not he will have to miss any time, either in practice or in terms of game, due to any injuries sustained. Presumably we will know more shortly. A local resident has described the road on which the accident occurred as dangerous, and having been freshly paved, only heightened the danger. The resident told WKYC that he even contacted the township to ask for more signs to be posted on the road.

We were on scene just as it was clearing out. Here’s a look at what his car looked like after the accident near Wadsworth in Sharon Twp ⤵️ https://t.co/fmr2a9tWAy pic.twitter.com/Jl4EtsDCSf

But if you’ve seen the photo of the state of his car after flipping over multiple times, I’m sure you would agree that he can count himself lucky to be in a state in which he was able to be discharged from the hospital on the same day.

The sixth-year veteran was coming off of a 29-17 victory along with his teammates over the Pittsburgh Steelers on Thursday night. The team had just returned to practice on Monday following the weekend before the accident occurred.

On the season, Garrett has recorded three sacks, though none against Pittsburgh on Thursday, along with seven tackles, four of which have been for lost yardage. He also has five quarterback hits, a forced fumble, and a batted pass.

A three-time Pro Bowler and two-time first-team All-Pro, Garrett has 61.5 career sacks in 71 games played, to go along with 210 tackles, 63 tackles for loss, 12 forced fumbles, one returned for a touchdown, and 10 passes defensed. He recorded a career-high 16 sacks last season, which prior to the 2021 season would have matched the Steelers’ all-time single-season record.

I don’t imagine there is much more to learn about the circumstances surrounding his crash at this point. We are just awaiting word on more details about his condition. It is unknown at this time if he is in a state that would allow him to report to the team facility today, for example, or return to practice by the end of the week, let alone play in the team’s next game.

an update on Myles pic.twitter.com/c2cXe1odzw